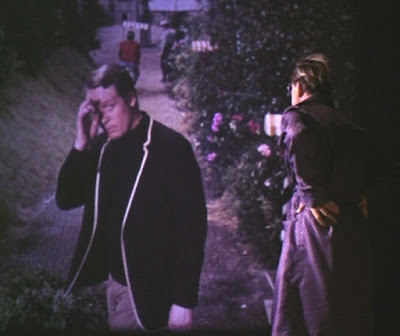 That Number 6, he’s always walking, irritating man! But if only Number 2 had known at the time, that Number 6 had just come from the woods, having infiltrated the secret laboratory and learning of what had been taking place there. Well what price all the surveillance, and Observers who are supposed to see and hear everything?! But perhaps there was no surveillance in the laboratory, after all no-one was supposed to know it was there except Number 2 and Number 14. But there you have it in a nutshell, Number 14, the weak link in the chain! She had occasion to go to the laboratory in broad daylight. As she left her cottage and was being watched by Number 6, who followed her through The Village, into the woods to the laboratory. So again what of all the surveillance in The Village, there are even cameras in the woods, and Number 6 was able to follow Number 14 without himself having been observed. It may be supposed that Number 6 following Number 14 may well have been caught on camera, but how often are the security tapes reviewed? Not that often I shouldn’t wonder, not unless something of importance happens. The breaking of curfew, an escape attempt, or breach in security, so unless an Observer happened to pick up on Number 6 following Number 14, then he would have got away with it Scot free!
But had Number 2 known of Number 6’s recent activity, what could he have done about it? The laboratory and what had been taking place there had been discovered, and there’s no way of making Number 6 un-know that, so bringing the experiment to a premature closure!