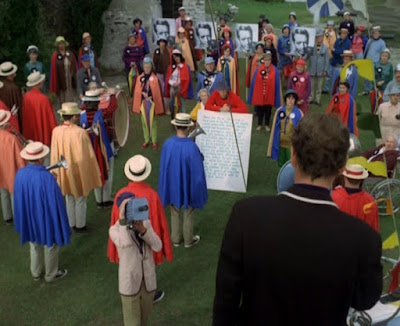 A vote for Number 6 is a vote for the security of the citizens as your local candidate stands for election! And yet “there are those who come in here and deny we can supply every conceivable civilized amenity within our boundaries. You can enjoy yourselves, and you will. You can partake of the most hazardous sports and you will the price is cheap. All you have to do in exchange is give us information you are then eligible for promotion to other and more attractive spheres. Where do you desire to go? What has been your dream? I can supply it, winter spring, summer or fall they can be yours at any time, apply to me and it will be easier and better.”
The hazardous sports he’s talking about probably includes Kosho, and in return all the citizens have to do is given him information, Number 6 is talking like Number 2 already, especially when the citizens have absolutely no choice in the matter. But there’s more, give him the information and he’ll release you from The Village, like Cobb was released to go onto more attractive spheres as he goes to serve his new masters. This new candidate for the position of Number 2 is trying to manipulate the citizens by telling them if they apply to him he’ll make it easier and better for them. But are these actually Number 6’s own words? The candidate did undergo therapy, brainwashing during the night before via the pulsator hidden in the overhear light. His first speech was off the cuff, as Number 6 wouldn’t have had time to prepare that speech, and the same seems to be said of his final speech and vocal exchange on the hustings with Number 2.
“Place your trust in the old regime their policies defined the future certain, the old regime forever and the old Number Two forever. Confession by coercion is that what you want? Vote for him and you have it, or stand upon firm upon this electoral platform and speak a word without fear the word is…..freedom. They say six of one and half a dozen of the other, not here, it’s Six for Two and Two for nothing and Six for free for all for free for all vote, vote.” Number 6 seems to be doing pretty well, but it’s not like him to carp, but what about Number 2, what does he do in his spare time? Sadly he cannot afford spare time, he’s working to his limit, we’re all entitled to spare time leisure is our right. But in Number 6’s spare time, if he gets it, what will he do? The answer is a simple one, less work and more play! Well that’s pretty obvious, and at least the words of that speech appear to be the candidates own. Whereas before, when he addresses the electorate from the forecastle of the Stoneboat apparently the candidate needed his speech to be written on an “idiot board” as a memory reminder for him to read. The question is who wrote that third speech for Number 6 {in all probability it was Patrick McGoohan} and why the need for the “idiot board” as it’s suggestive that those are not the candidate’s own words. And when he made that speech during the lunchtime news he already sounded like a newly elected Number 2, but one of the old regime, not of a candidate whose intention was to find out who the prisoners and warders are, to stand on a platform for free speech and freedom!