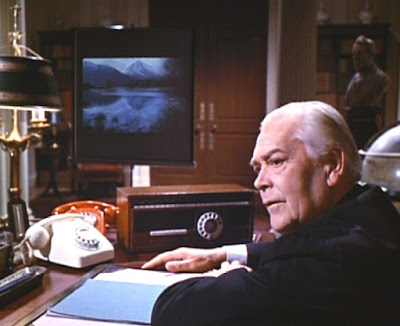 “What’s number six?” When originally I heard Sir Charles Portland say that I thought what does he know about Number 6? Yet in this instance its a photographic slide he’s talking about, but perhaps in Sir Charles saying those words they are designed to put the viewer on the alert, to expect a little more than just a change in photographic slide! It could be one of those “in jokes” Patrick McGoohan wasn’t so terribly keen on, unless it was one of his! After all its a bit of a coincidence that Sir Charles should say those exact words “What’s number six,” when the main character’s number in ‘the Prisoner’ is Number 6. But in that may lie the design. If Sir Charles had said “What’s number eleven, or what Number twenty three” any number other than 6 it wouldn’t have been so noticeable.
Did Sir Charles know of The Village, and if he did did he know his future son-in-law had been abducted there? If not then he was telling his daughter the truth, and yet even after 50 years its still not clear either way. Don’t forget ZM73 had handed in his letter of resignation, but his fiancee Janet Portland was still under the impression that her finace was still working for her father. So her fiance had not informed her of his decision to resign his position in her father’s department, and if Sir Charles was aware he certainly kept it to himself! And if he didn’t know, then either the Colonel or that bureauocrat to whom ZM73 had handed in his letter of resignation, had not passed it on. And yet that cannot be right, as the two previous Colonels knew of their ex-colleagues resignation, one even attempted to extract the reason behind it from Number 6 during ‘The Chimes of Big Ben.’ Oh well it is ‘Do Not Forsake Me Oh My Darling’ after all.
But I digress, what’s Number 6? It’s a badly under-developed picture of Doctor Seltzman!