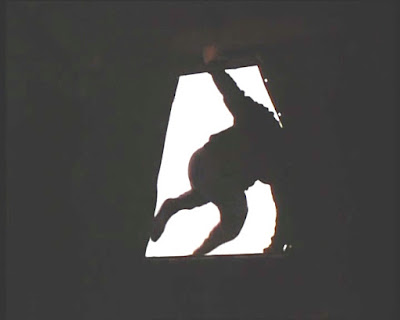 In ‘Many Happy Returns,’ Number 6 dodges passed the police roadblock, they are apparently looking for an escaped prisoner, which I find particularly ironic. Anyway, he jumps aboard and into the back of a large Luton van with the name NETCO, on the tailgate of the van, it’s a sign which doesn’t look quite right to me, I suppose it’s the white background. It’s as though the sign has been contrived for the camera, because I would have thought such a sign would have been on the side of the van, not just on the tailgate. A sign on the side of the van wouldn’t be seen so well on camera, but on the tailgate the sign is ideal for the camera!
He climbs up onto a ledge above the driver’s cab, gets himself a sack to cover himself, and goes to sleep. Suddenly Number 6 awakens to the sounds of a police siren, instinct suddenly kicks in. I don’t know why, but he gets up and he leaps out of the back of the van........into the busy road of Park Lane! I’ve never understood why Number 6 suddenly leapt out of the back of that van, after all he had no idea where he was, certainly the sound of the siren had an effect upon him. But having leapt out of the back of that van he might easily have leapt under a London bus, been hit by a taxi or car, and laid badly injured, or worse, lay dead in the road! I’ve always thought what a terrible risk he took by doing that, it was so unnecessary because no-one knew he was there, least of all the van driver. And really I suppose, Number 6 was most fortunate that the van was travelling to London in the first place.