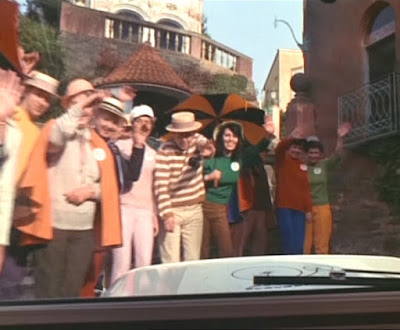 Why are these citizens so happy for Number 6? Number 6 who is just being driven home from the hospital having undergone the process known as Instant Social Conversion. They think he has been pacified, lobotomized, all the aggression taken out of him, why should they be happy about that? It might well be that many of them are pleased it’s been done to Number 6, and not to them!
It might be supposed that the “Lobo” man is the only person in The Village to have undergone Instant Social Conversion, whom Number 6 encountered in the hospital, and later while listening to a silent speaker of the public address system.
All that the doctor-Number 86 did to Number 6 is to heavily sedate him, but then the good people of the community didn’t know that. All they knew was Number 6 would turn out a model citizen, no more trouble making, no more going about causing disruption, or attempting to escape. Well that last one is right, Number 6 hasn’t attempted to escape The Village since over two episodes ago in ‘Checkmate.’ Perhaps he finally came to realize that escape is not possible, after all there are only a few ways one can try to escape. By boat, well he tried that no fewer than four times, by land, he tried that twice and failed the once, and found it impossible the second time. But he never tried going the other way, not out into the estuary, but along the river in a dug-out canoe. That would have meant felling another tree and carving out the wood of the tree trunk, which he once did before. It may be supposed that he had simply run out of options. Mind you, remembering Number 8, who once said she would help him to escape if he had a good plan. She told him that she had often helped others with their plans. I just wonder how many different plans she helped with? Were there several different plans, or variations on the ones attempted by Number 6? Anyway for the moment, even though he’s merely sedated, Number 6 has peace of mind, but as we know that will not last long!