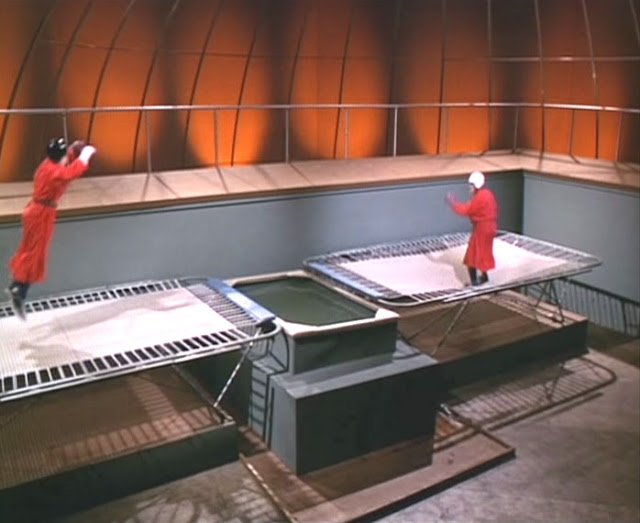 When Number 6 was standing for election against Number 2, in that speech he gave from the forecastle of the Stone boat he tells the electorate “You can partake in the most hazardous sports and you will,” perhaps Kosho is one such dangerous sport he had in mind. It certainly looks pretty dangerous! I recall when I used a trampoline at school many of my classmates used to have to stand around the trampoline in case if an accident. But it’s not just the danger of falling from one of the trampolines, one could lose ones footing and slip off the top of the wall. There might be a handrail, but the top of the wall has a slope to it. One wrong slip, lose grip of that railing...... And then there’s the water tank. When you have your opponent at your mercy you’re supposed to dunk him into the tank of water. It’s no wonder they have to wear crash helmets, without one you could crack your head open if it hit the side of that tank. Death could be instantaneous! Health and Safety today would have a field day if they saw anyone taking part in this outlandish and dangerous sport!