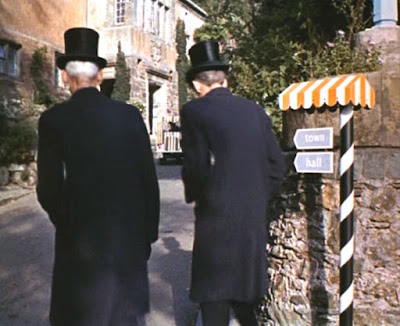 “Haven’t we been this way before?”
“Yes, we always go this way when we’re going to the Town Hall.”
“Well wouldn’t it be nice if for once we took the scenic route?”
“That’s not like you, you’re generally so business like.”
“Well I thought a change is as good as a rest!”
“Isn’t that the Colonel getting out of that taxi?”
“No.”
“Oh my mistake.”
“What made you think that?”
“Oh I just thought for a moment……who is it then?”
“I don’t know, he must be new here.”
“He must be someone important, see he’s with Number Two!”
“Is that Number Two?”
“Well who else would it be?”
“I thought Number Two wore spectacles, and sported a moustache.”
“He does.”
“Well the Two who has just got out of that taxi doesn’t!”
“He’s wearing the old college scarf, and carrying the umbrella shooting stick, so he must be Number Two.”
“But not our Number Two!”
“What do you mean?”
“Perhaps he’s impersonating Two!”
“A Two impersonator, if he is, he’s not very good at it. He doesn’t even look like Two!”
“Suppose not. Better put a spurt on, or we’ll be late for the meeting.”
“Board of education?”
“Yes.”
“I’ve not seen you there before!”
“I, I’m a new member.”
“Ah that would explain it. By the way you needn’t keep taking off and putting on your spectacles like that, and that moustache you’re wearing……..it’s coming off!”