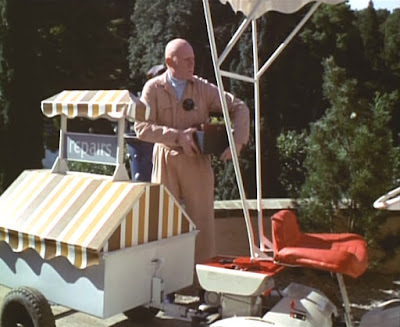 In an emergency the electrician walks. Well that garden truck is a bit slow, but they get you there in the end, and that’s what counts. Besides where’s the emergency here? But it’s a bit more than a broken loudspeaker, it’s been trampled to pieces underfoot by the Prisoner, if the Observers had been watching they would have seen that. And there’s a rule about that, deliberate destruction of official property is an offence, according to Number 12 of administration, which could result in one of two things, imprisonment, or a fine. But seeing as it was his first day perhaps they let him off!
That garden tractor, it’s fitted with the canopy that was originally attached to a Penny Farthing bicycle. Obviously it didn’t work too well being part of the bicycle which appeared in the series minus the canopy, and for some reason someone in the properties department decided to attach said canopy to this garden tractor. I can see that such an attachment would make the Penny Farthing top heavy, but isn’t such a canopy supposed to give protection against the elements? It doesn’t look as though it would afford the driver of this tractor much protection, it’s way too tall, leaving the driver open to the elements! Perhaps it’s a metaphorical canopy, being symbolic rather than to have any practical use. After all such canopies can be seen all around The Village, on taxis, bicycles, sign posts, and over speakers of the public address system, such is its practical use, the protection of public property. As for the citizens themselves, mostly they carry with them an umbrella, again symbolic of the protection The Village affords them. Besides it only rains in The Village occasionally, what other use could an umbrella afford anyone...perhaps as a parasol against protection from the sun!