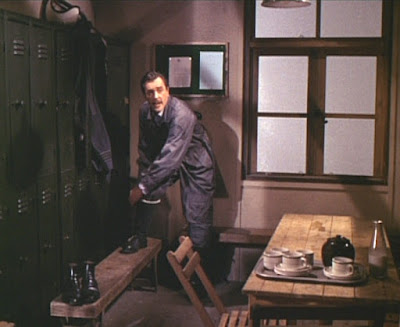 In The Kitting Out Room Number 6 and the RAF Group Captain are preparing for a long flight. The Colonel is studying the navigation board, with 500 by 1500 to sweep, 750,000 square miles, quite an area. Clearance had just come through for refueling at RAF Gibraltar. Then they’ll sweep as far as they can today, then again tomorrow, and tomorrow, and tomorrow. Number 6 is a stubborn fellow. As Number 6 and the Colonel leave the kitting out room the RAF Group Captain shouts to them “I won’t be a minute” and the doors to the Kitting out room are closed. The Colonel bids his ex-colleague good luck and they walk towards the Meteor jet aircraft which has been fuelled and prepared for the long flight. Meanwhile the milkman having parked his milk float outside the Kitting Out Room is sorting out his crates of milk bottles as he watches the Colonel and Number 6 walk away. He then picks up a crate of milk bottles and walks towards the double doors of Kitting out Room. We don’t see it of course, but the milkman enters the Kitting Out Room, and what takes place after that is complete supposition. But why did the Colonel hang back, “I won’t be a minute” he said. Was that deliberate because he was waiting for the milkman? Perhaps the Group Captain then helped the milkman into a flying suite, because the milkman had only a few moments before he had to join Number 6, having taken the place of the Group Captain as pilot of the Meteor jet aircraft. That would presuppose that the Group Captain was in league with The Village. Then again, it might be quite on the cards that the appearance of the milkman at the aerodrome was something ordinary and everyday, as he delivers the milk, and this agent has taken his place which would naturally get him into the Kitting Out Room. The Group Captain might have been taken by surprise for a moment by the arrival of the milkman, and then overcome by nerve gas! The milkman having produced a gas gun as he entered the Kitting Out Room, fired the gun subduing the Group Captain. Once the nerve gas had dissipated, he quickly got into his flying suit and helmet, and with the tinted visor down, hurried to the aircraft having taken the Group Captain’s place.