A Favourite Brand of Cigar! 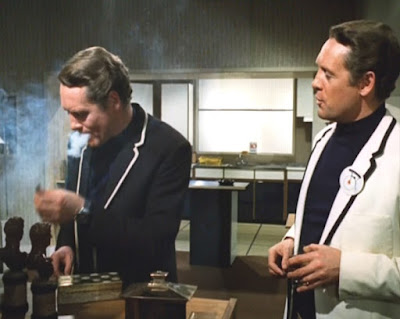 “Cough, cough, cough, what’s in this cigar? It tastes of old socks!”
“Don’t blame me, they’re your cigars!”
Which is correct, also every cigar in that humidor must have had a thin piece of plastic running through it, otherwise Number 6 might have selected one which hadn’t. Not only that, but the humidor in ‘12 Private’ also contained cigars with plastic wire running through them. That might well have been in case Number 6 tried to smoke in that apartment. It seems they were taking no chances, although with hindsight that might have been a mistake, because Number 6, being left to his own devices, discovered a thin plastic running through a cigar. The question is, what was a box of Number 6’s cigars doing in ‘12 Private,’ unless they were 12’s cigars. Although there is no evidence that 12 smoked at all, after all he only offered to light 6’s cigar for him. But unlike Number 6, he didn’t know the proper way to light a cigar!