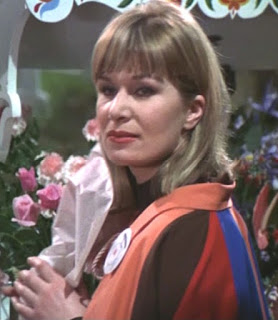 Well if it isn’t Number 14, you’re a doctor, I’ve been having some nasty dreams of late, perhaps you could help me?
I see you’re buying flowers, no-one to buy them for you? Oh perhaps they’re for the hospital, a patient maybe, not Number 6 surely? No, the flowers are for you. You do know Number 6, you should, you’re experimenting on him with a newly developed drug of yours, no don’t bother to deny it. But what’s it got to do with me, well nothing, nothing at all. Poor old Number 2, he’s under a great deal of pressure you know. You wanted a week to deal with the question of Number 6 and his dreams, but Number 2 hasn’t got a week, he’s got three days. Which means you had three days to get it right, otherwise Number 2 will see your drug tested on you! Was that wise of you not telling Number 2 that Number 6 opened his eyes and saw you? If only Number 2 hadn’t been distracted by “A’s” file at the time, he might have seen you projected onto the wall screen through 6’s eyes.
You met with Number 6 once, outside the laboratory, well you feigned you didn’t know him. Tell me, did you know Number 6 was following you that time, through The Village, and through the woods to the laboratory? Were you in fact deliberately leading him there in order to discover what you and Number 2 were doing to him? Sorry, I’m beginning to sound like an interrogator, believe me, I’m not accusing you of anything.
You put words into B’s mouth, and then you used that phrase of your? What phrase is that? “We all have to make mistakes, sometimes we have to.” That’s what you said to Number 6. But in the dream it was “We all make mistakes, sometimes we have to,” so which is the mistake? But its close enough to be a recognition signal, is that why Number 6 didn’t believe it was ‘B’s’ words he was hearing?
And then finally ‘C’ was that really Engadine? No surely ‘C’ was Number 2! He failed of course, he blamed it on your drug, but the ultimate failure lies with him. And you were pleased about that weren’t you? Your drug didn’t fail, Number 6 succeeded, but may I say, with some small help from you?