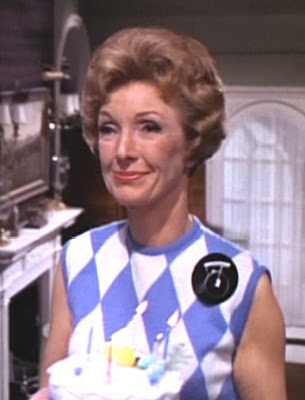 The question is, just when did this Number 2 arrive in The Village? Judging by her dress it must have been quite recently, because Mrs. Butterworth was wearing that dress when she was being questioned by a man from Special Branch, or another branch of British intelligence. In all likelihood she was in a hurry to get to The Village, so much so that she didn’t have time to change! It might be that this Number 2 arrived in The Village only a short time before Number 6’s arrival! Such is the impression given by the wearing of that dress, that Mrs. Butterworth hadn’t had time to change into Village attire!
There is something which makes this Number 2 unique. Yes we know her name, or at least she is the only Number 2 to be given a name. Yet there is something else which makes her unique amongst her number, it’s the badge. She is the only Number 2 to wear the negative badge whereas her predecessors and successors wear the positive badge. Also the colour of the number on the badge is unique. Mrs. Butterworth as Number 2 is the only citizen in The Village to have a white number, whereas all other numbers on both positive and negative badges, as far as we can say, are red!