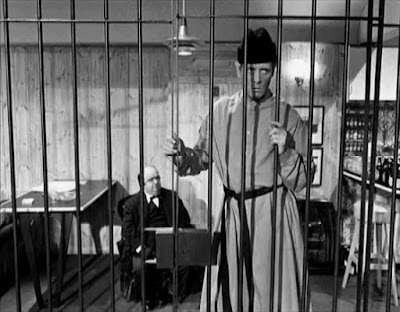 “Is this what it’s come down to, having spent over a year working practically day and night on a television series, having worn myself down to a frazzle in the process! What hurts is that no-one other than me seems able to comprehend. Now I’m locked in a cage like some prisoner, wearing Cossack looking clothes and a Russian hat, and a dwarf who refuses to take his costume off! If somebody doesn’t unlock this door pretty soon, something’s going to happen! I’m going to drink all that beer over there, then you’ll all look petty stupid for having locked me in here with it in the first place!”
Voice from the back “Explain the Prisoner to us, then we’ll let you out”
“No, you explain it to me!”
Another voice from the back “Is he trying to create an impression?”
“He’s just being eccentric that’s all!”
“Let me out!”
“You’re supposed to be the Prisoner, escape yourself!”
“That’s the Prisoner!”