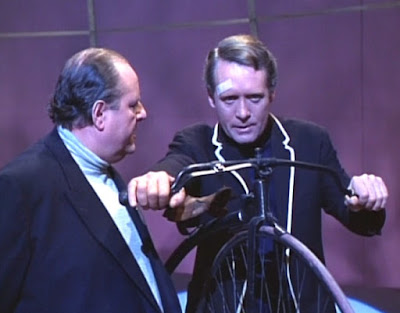 ‘A change of Mind’ sees Number 6 pay a call on Number 2 wanting to carry on their previous conversation. Everything in his mind is clearer, much clearer, and happier, such peace of mind. And to think Number 6 resisted for so long. Now everything is clear cut, it’s quite simple. Ad the way Number 6 takes hold of the handlebars of the Penny Farthing bicycle, symbolizing that he is now taking the wheel. Number 6 will play the tune and Number 2 will dance to it! Number 6 is dictating terms now. He has a plan, a sudden desire to confess, but not just to Number 2, but publicly, so that his confession might encourage others with secrets to speak out also. In this, Number 6 shows his ability not only to manipulate Number 2 by promising to give him what he wants, and more, but also in the manipulation of the citizens, not to mention Number 86!