A Right Pair of Six’s! 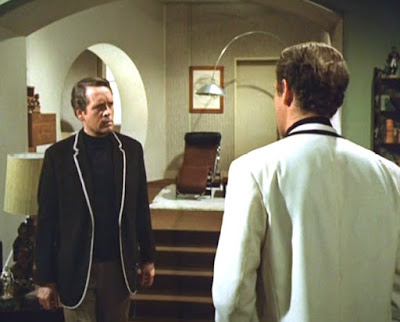 “And what have you come as?”
“What do you mean?”
“That jacket!”
“Don’t you like it? I think it looks rather snazzy!”
“Do you?”
“What have you got against it?”
“It won’t stay clean for five minutes. You’ll need two of them.”
“How do you mean?”
“Well one on, and one at the dry cleaners!”
“Like you, you mean? I’ve seen you.”
“No you haven’t.”
“Yes I have, I’ve seen you wearing different jackets in the same episode. Occasionally one scene you’re wearing a jacket with broken piping at the lapel, as you do now. And in the next scene the jacket has joined piping at the lapel!”
“Your point being?”
“Is the difference in the piping so that you can tell which jacket you are wearing at any given time?”
“I hadn’t really thought about it.”
“You see that way, for those who are watching, they know you have two different jackets. Whereas if both jackets had the same piping it would look as though you had but the one jacket.”
“And your reason for wearing that particular jacket?”
“Well I wouldn’t want to look exactly like you, would I?”
“I thought that was the whole point of the thing.”
“Well in their difference, our jackets are identically different, except for the piping which is identical at the lapel in both cases!”
“Say that again?”
“Well think of us in photographic terms. I’m negative and you’re the positive.”
“I don’t wish to think of us at all.”
“Look lets have a drink, and discuss this like gentlemen.”
“You can have one of my cigars,”
“That’s very kind of you.”
“Oh think nothing of it. Whisky is it?”
“With ice.”
“You’ll find the cigars in a box over there.”
“And I keep the ice in a thermos bucket over there.”
“You know if we swapped jackets, no-one would know who we are!”
“I know who I am, I’ve no idea who you are!”
“We are both opposite and the same.”
“I’m nothing like you!”
“I should take a look in the mirror if I were you!”