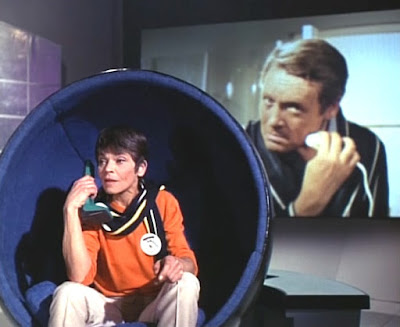 Is that Number 6’s own electric razor? What I mean is, did it come to The Village with the Prisoner? If so I expect it was checked by security. I only put forward the idea, because there might have been a radio transmitter in it, not voices, but one that sends an automatic distress signal. John Drake had an identical razor when he infiltrated Colony 3. The signal was picked up, and a contact working in Section Three had Drake extracted from the Colony. I suppose to have brought the razor with the Prisoner would depend on whether or not his two suitcases were brought to The Village with him.
But sadly there appears to be no radio transmitter in that electric razor {as he would have used it} and there’s no-one in Section Three. In fact no Section Three, if it comes to that. No-one able to extract the Prisoner from The Village. Which is a sad look out for Number 6, he’s a man in isolation, with no-one in either The Village nor the world to help him.