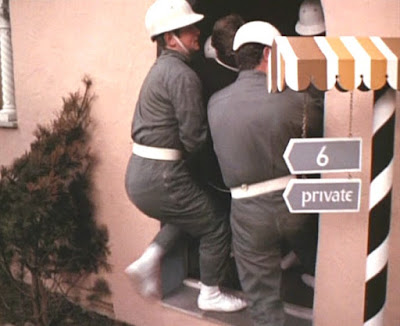 This isn’t usual is it? They usually come for Number 6 in the night-time after he’s fully sedated, having drunk his nightcap of hot chocolate. It’s usually a doctor and orderlies who come for him, not kicking and struggling as he’s being manhandled, out of his cottage by four security guards! What is it, an emergency or some such thing? Whatever it is, they must want Number 6 pretty badly to go to such measure as these. Surely they could have come for him in the night, and saved themselves a good deal of time and effort. As it is someone must have sedated the Prisoner-Number 6 as they placed him in that Red Cross trailer, probably by the medic sat behind the wheel of the Mini-Moke, otherwise Number 6 would have simply jumped out. And he’s not strapped into the trailer either, so seeing as he’s just lying there he has to have been sedated. Which would have been the case had they collected Number 6 from his cottage during the night!