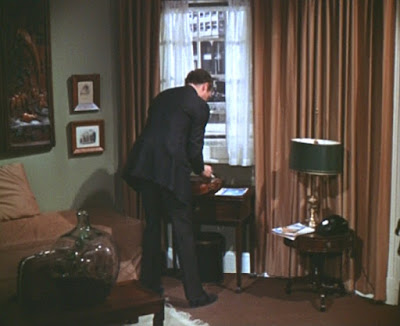 Upon returning from handing in his letter of resignation ZM73 {for want of a better name} returns home. He collects a ready packed suitcase, his passport and airline ticket. On a side table under the window is a brown attaché case into which he places two travel brochures. Outside in the hallway an undertaker puts a gas gun to the keyhole of the study door and pumps nerve gas into the room rendering ZM73 unconscious, if not paralyzed!
We can only speculate about the contents of the attaché case, whether or not they are files containing sensitive information, private papers, or something entirely different.
Eventually the Prisoner wakes up in what he thinks is his own home, and when he gets up to look out of the window. The brown attaché case can be seen on the side table beneath the window, because the room has to be exactly the same when he wakes up to what it was when he was rendered unconscious. However, after the Prisoner has been out and about in The Village, at the café, attempting to make a telephone call, taking a scenic taxi ride, and finds out about maps of the area, he leaves the General Store. If he had gone straight back to his cottage instead of going round the other side of the General Store and along the road, he would have encountered the housemaid in his cottage. Instead he sees from the road, a housemaid standing on the balcony flicking a yellow duster.
The Prisoner then rushes back to his cottage not only to find his cottage now has a number, but the housemaid gone. He looks out of the window to see her hurrying away down a set of steps, and the brown attaché case which had lain upon the side table beneath the window has gone. The housemaid didn’t take the attaché case, she’s not even carrying that yellow duster, which she later goes back for.
It might well be that when the Prisoner had been brought to The Village, both his suitcase and the attaché case had already been searched before they had been placed in the cottage, and anything of importance removed. As for the non-presence of the attaché case, I can only suggest that in having dusted and tidied the cottage the housemaid placed the attaché case, along with his suitcase in the wardrobe in the bedroom. But just a minute, the Prisoner had only just moved in, the cottage didn’t need dusting let alone tiding up. More than that, at that time there was a dividing wall between the study and the rest of the cottage, making it impossible for the housemaid to gain access to the rest of the cottage! So both the suitcase and attaché case had to have been removed after the Prisoner had left his cottage to take his first tentative steps in The Village by person or persons unknown. After all he wouldn’t be needing either the clothes in the suitcase, or the items in the attaché case, any important papers or files removed and carefully filed away.