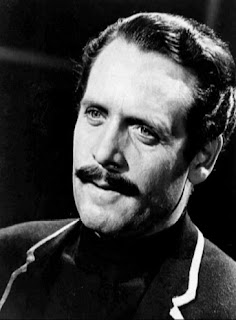 “What do we know about this man?” he asked. I leaned forward in my chair sucking on my pipe, and studied the photograph. “Nothing” I said “Although there is something familiar about him.” “Well you’re the investigative journalist around here, so find out!” And with that he stormed out of the office, slamming the door shut behind him.

My investigation went as follows. The man in the photograph is Curtis, and presumably this is how he looked on the day of his arrival in The Village. According to his file, he was brought here to impersonate Number 6. This after having studied Six’s file, his mannerisms, the way he walks, talks, everything about the man. And during that time he underwent a complete make-over in order to change his appearance to Number 6. We don’t know just how long Curtis had been in The Village, but we do know that during the night of February 10th, Number 6 and Number 12-Curtis, swapped cottages. So that on the morning of the 10th, which should have been the morning of the 11th in order to make it right {although it would have been between four to six weeks later, by which time The Village Festival was over} Number 6 woke up in a strange apartment, that of 12 Private. He himself having undergone a make-over, to look like Number 12-Curtis. He had also undergone certain conditioning. From being right-handed to left-handed, to smoke black Russian cigarettes, and to have flapjacks as his favourite dish, and the mole on his left wrist removed. And during all that time, Curtis now impersonating Number 6, had been ingratiating himself within The Village.
Number 12 received a telephone call from Number 2 inviting him over to the Green Dome for breakfast. Whilst he was there, he noticed a copy of The Tally Ho dated Feb 10th. The date was wrong, unless it was yesterday’s newspaper. Because Number 6 went to bed on the night of the 10th, and was supposed to have woken up the next day, that being the 11th. And when he woke up that morning, he would have changed the date of his day-date calendar to the 11th. As no-one changes the date to the next day before they go to bed the previous night!
So, for a man like Number 6 to have rejected his number, his only form of identity in The Village, now that even that has been taken away from him, he’s desperate to cling to that identity. To prove that he is Number 6. He tries to do this through fencing, shooting, and using his and Number 24-Alison’s mental link. But Alison betrays Number 6 turns the cards on him, in order to make him think that they do not share any form of mental link. She does this by only calling out one correct card of the five Zener cards. Whereas when Curtis holds up five cards, Alison calls all five cards out correctly. It’s an old mind-reading trick. Curtis holds up each card in turn, and a signal passes between him and Alison. In this case the signal for each card is how he places the emphasis on the word “Now.” Thus it appears that it’s this Number 6 who shares the mental link with Number 24, not the other Number 6. This is also something which Curtis and Alison would have to have practised while Number 6 was undergoing the four to six weeks conditioning treatment.
In regard to proving Number 6’s identity, Curtis said, taking a Polaroid picture from the breast pocket of his white blazer {one of many taken by Alison, as she practiced on Number 6 for the photographic competition as part of The Village Festival} “I could have identified myself much earlier, but it would hardly have been fair.” Alison takes the offered Polaroid picture, and looking at it says “Isn’t it awful? I took it last night, he’s all arms and neck.” Number 6, the one in the dark 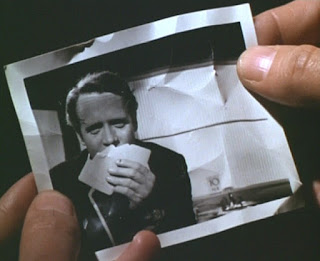 blazer snatches the picture from Alison’s hands and looks at it himself. Now I have watched the surveillance footage, and I still cannot understand why Curtis bothered to produce that Polaroid picture in order to prove his identity of Number 6. Because the picture should actually have disproved any suggestion that Curtis is Number 6. Why, because of the simple reason that Number 6, the real Number 6 is wearing a dark piped blazer, as in the picture. While Curtis produced the picture from the breast pocket of the white blazer he was wearing. It’s a point Number 6 should have picked up on, but which he failed to do. Had both Number 6’s been wearing identical coloured blazers, then there wouldn’t have been a problem with the Polaroid picture.
Alison suggested that there was a much easier way to identify Number 6, he has a mole on his left wrist. The trouble was he didn’t, although He didn’t, but Curtis did! However at that moment, had Number 6 taken a close look at the picture, he could have countered Curtis’ mole, with his bruised fingernail! Alison was taking another Polaroid picture of Number 6, she accidentally knocked over a soda siphon, bruising a fingernail in the process. Later Number 6 picked up on that, when he was studying the bruised fingernail in the picture, against that of his own. In the picture the bruise is at the base of the fingernail, yet on his, shows the bruising halfway up the nail. But that’s not really the point. The point is, did Curtis have such a bruised fingernail? I bet he didn’t. And if he didn’t, that fact alone would have proved Number 6’s identity!
Apart from the anomaly of the Polaroid picture, when Number 6 reveals that there is no mole on his left writs, why is he wearing a wristwatch with a stainless steel band. And where did he get it? Number 6 always wears a wristwatch with a leather strap, and at night he puts in on the bedside table next to the wooden calendar. When Number 6 wakes up in that strange apartment, but not quite himself, the calendar is there on the bedside table, but there’s no watch, with leather strap or otherwise. And it’s not on the dressing table either. So where did Number 6 get it? Further more to the identity of Number 6,  Curtis’ body language is different to that of Number 6. He’s somewhat more arrogant. And while he impersonated Number 6, Curtis added little amendments. Because when Curtis enters the cottage of ‘6 Private’ he’s whistling. When did you ever hear Number 6 going about The Village whistling? Certainly nothing of the sort turns up on surveillance! It may be argued that with Curtis they created the perfect Number 6 for their purpose. He’s at home in The Village. He’s at ease with himself, what’s more he’s accepted his number, indicated by the wearing of his badge.
Curtis-Number 6, is there to disorientate Number 6. He demonstrates that he’s better than Number 6. It’s almost as though Curtis is proud to be Number 6, “Look at my badge, I’m Number Six, what’s more I’m better than you.” And so Curtis provoked Number 6. On the face of it, having taken away Number 6’s identity, it looks as though they want to convince him that he isn’t Number 6. The idea is to break him. And that’s surprising really because records show they didn’t want any harm to befall Number 6. Former Number 2’s didn’t want a man of fragments, or were told not to damage the tissue, his brain tissue. Now we have the first Number 2 who is allowed to break Number 6! On the other hand, it could be interpreted that they didn’t want to convince him he’s not Number 6, but they wanted to make him fight for his identity.
Finally the following has occurred to me. Number 6 returns to his cottage finding his counterpart lying on the bed, who has been reading a book. He produces a gas-gun, nerve gas, five yard range, one squirt you’re paralysed, two squirts you’re dead. But then in such a confined space, so would Curtis be, don’t you think? But I digress, Number 6 goes on to say “I couldn’t sleep. I came here because….who am I?”
Well there was no need for Number 6 to panic, they know who you are, Curtis knows who he is, and more importantly so does Number 6! So upon impersonating Number 6, but as Number 12, he goes to see Number 2. Number 2 may have a slight doubt, but he sends the man he thinks to be Curtis, to see Alison, as she might have some insight into Number 6’s motivations. She doesn’t, but is left in no doubt as to the identity of the man who paid her a visit in the guise of Number 12. Later Curtis changes into his civilian clothes, and prepares to leave The Village. But just a minute, isn’t there a mistake being made by Number 2 in allowing Number 12 to leave The Village looking like Number 6? Surely Curtis should at least have undergone a make over in order to make him look like his former self before he was allowed to leave. Time might even have been given in order for Curtis to re-grow his hair to its correct colour of black, as well as his moustache, so that his appearance is the same as on the day he arrived in The Village. Because if Curtis was to return to wherever he had been seconded from looking like Number 6, people there, either wouldn’t recognise him, or if they did, would want to know what had happened to him? As it is, it’s just as well Susan died a year ago, otherwise looking the way he did she would have hardly recognised Curtis when he returned to her!
But the question a still remains, who was Curtis, and where did he come from to be seconded to the Village! I have been unable to uncover this.