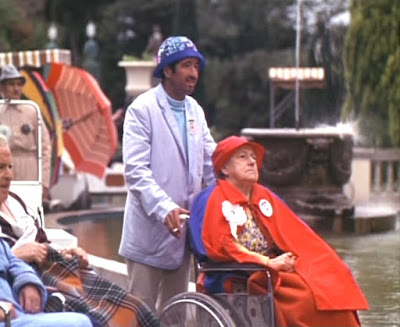 The chap pushing the old woman, possibly Number 113, in the wheelchair, is he wearing that hat for a bet or what? That’s a woman’s hat isn’t it? And purely as an observation, he doesn't appear to fit in with the rest of the citizens somehow. He looks a bit too rough and ready, too uncut, you might say, he could certainly do with a shave. What’s more he's smoking, observe the cigarette burning in his right hand. That makes him one of less that a handful of citizens who we see smoking in The Village, Alison being one, and Number 6 the other!
Fictionally speaking, as a citizen of The Village, this man is evidence that citizens do actually smoke. However on the production side of ‘the Prisoner,’ I wonder if this man should have been smoking at all, and if he shouldn't, the fact that he was went unnoticed by persons of the production crew, but more noticeably, by Doris Martin who was responsible for continuity for ‘Free For All.’