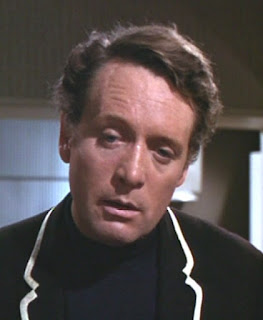 “Tell me now, who am I?” Yes that’s what we would like to know! In Germany you went by the name of Schmitt, in France Duval in fact you took the name of the most common surname used in each country, that’s why in Britain you chose Smith! And yet there is a remarkable resemblance between you and John Drake, but I suppose three look-a-likes for you would be stretching a coincidence too far. In The Village you are Six, Number Six, well I suppose it’s as good as any name, or number. And yet you claim not to be a number, you are a free man, well hardly that. But you are a person. But why protest? After all a number in The Village is more individual than a name. And even in the outside World you were known by a number ZM73. 73, that’s the same number as the woman who committed suicide by jumping to her death through a hospital window. So what’s the ZM stand for I wonder? Zebedee, Zeke, Zack? And the M, Mitchell, Michaels, Montague, Macbeth? Even your fiancée wouldn’t use your name. Tell us Number 6, who are you? Now where can the harm be in that? Unless you have such an embarrassing name that you refuse to use it. Do you know, that after almost 50 years there is one thing we can be sure about you Number 6, and that is we can be sure of nothing!