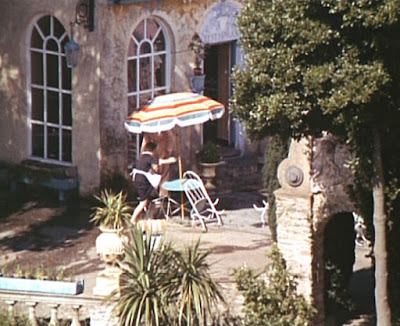 It doesn’t matter what they do to Number 6, Village life goes on much the same. Not just the same, exactly the same, in fact. Because after spending the entire night reciting nursery rhymes to Number 6, when Number 2 looks out of the window there’s the waitress just getting down from a table having opened that canopy. And there’s the gardener hosing down the patio, just like it was on the day the Prisoner-Number 6 arrived in The Village. It’s a scene that would take place every day in The Village. As Number 2 looked out of the window of ‘6 Private’ it could have been on the day of his own arrival, except it isn’t. But perhaps it reminded him of his first day in The Village. I wonder what his number was back then. I bet a pound to a credit unit that it wasn’t Two, seeing as he had been brought to The Village as a prisoner. Now he’s prepared to put his life on the line for the cause. He might have been a good man, he still is a good man, but if Number 1 gets Number 6 he will be better! But better than who, better than Number 2, or better than Number 1? Perhaps Number 1 was looking to hand the Village over to someone, someone better than himself perhaps. But seeing as Number 1 and Number 6 turned out to be one and the same, what’s the difference. Except perhaps escape for one and confinement for the other. But as it so happens both escaped at precisely the same moment, so what price the Village then? Presumably to be left alone, abandoned, and uncared for?! I feel quite sad all of a sudden.