Eminent scientist Dr. Leo Pugh who recently made the incredible discovery of a 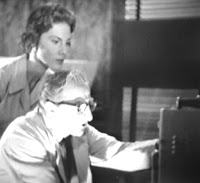 new planet in   our solar system, Planet X.
“Doctor what’s that showing on the monitor?”

“Where?”
“There, in the lower left-hand quadrant, it appears to be moving at tremendous speed.”
“Yes I see it now, speed three hundred miles per second, it could be a meteorite, it’s huge. I’m tracking it. It’s travelling on a straight course.”
“Where did it come from?”
“I don’t know. I’ll try and re-configure its course back, back to….”
“Back to where doctor?”
“Planet X!”

Pugh called in rocket scientist Professor Quatermass to discuss this latest discovery with him. And after making a number of calculations the trajectory of the meteorite was calculated to be on a straight course to planet Earth! “I know its incredible Quatermass” Pugh said “but I’ve been studying the meteorite as it’s drawn nearer to the Earth, I believe it to have an atmosphere.” “An atmosphere?” said Quatermass, “impossible!” But yes, an atmosphere consisting of hydrogen, nitrogen, and methane, a poisonous atmosphere to all forms of life on Earth! But what kind of life form might be contained within that meteorite, breathing such an atmosphere?

With the meteorite getting closer and closer to Earth, but slowing down, the decision was taken to destroy it by use of an atomic rocket. Quatermass made all necessary preparations at his rocket base. The rocket design was flawless. However the atomic motor was unstable and likely to go “critical” at the point of lift off, as his previous rocket had. The Rocket site was cleared of all subsidiary personnel. The chemical 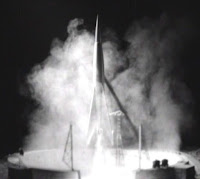 booster was fuelled and final checks and calculations made, and the countdown set. A klaxon was sounded, the final stages of countdown 10 9 8 7 6 5 4 3 2 1…the chemical booster fired, the rocket lifted off the ground. All well, rocket gaining altitude, 3 miles, 5 miles, 8 miles leaving Earth’s atmosphere still on course no variation. At 1 hundred miles the chemical booster jettisoned, the atomic motor starts and the main rocket increases speed on a heading straight for the meteorite. The idea being that the reactor core will go critical once contact is made destroying the meteorite in an atomic explosion. But as the rocket approaches the meteorite at more than 200,000 miles per second something breaks away from the meteorite, something too small to be observed on the monitors by Quatermass or Dr. Pugh, heading towards Earth’s atmosphere.
“Quatermass, impact with the meteorite in ten seconds, 9 8 7 6 5 4 3 2 1.”

“I see it on the monitor Leo, atomic motor reaching critical.”
A few hundred miles from Earth there is a blinding while light, the meteorite has been blown to pieces and incinerated in the heat of the explosion…..To be continued!
Be seeing you
Posted by David Stimpson at 08:39