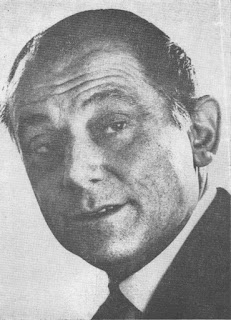 “Hello Number Two……oh don’t tell me we have come at a bad time!”
“No it’s alright, come in why don’t you.”
“Can I offer you tea?”
“No thank you, we wondered if you had another statement to make?”
“Smile” click goes the camera.
“No……..no I don’t think I have. But I tell you what I have been reading in The Tally Ho, apparently a hitch-hiker has been killed.”
“What hitch-hiker?”
“Yes that’s what I had to ask myself.”

“Doesn’t make any sense……does it?”
“No Number Two.”
“There’s isn’t a single word about any such hitch-hiker being killed is there…..is there?”
“No Number Two.”
“But I am intrigued about First Avenue Holly Lodge and the virtual prisoners there. Then I read this……and wondered what decision had been taken.”
“Perhaps you can explain?”
“I’m sorry Number Two, I can’t.”
“You didn’t write this drivel about Londoners without garages or small boy has gone to, and if you will kill him you might give me a nice little bit of him to eat as a reward for telling you where to find him.”
“No Number Two.”
“And what has Mrs. Smith of four the Ridgeway got to do with The Village?”
“Who?”
“Her name is on the front page of The Tally Ho, in the bottom right-hand paragraph! And while we are on the subject, who is Mr. W. H. Monday when he’s at home?”
“I don’t know Number Two.”
“You are Number One-one-three, and you contribute to The Tally Ho.”
“Yes Number Two. And he is my photographic colleague Number One-one-three b.”
“Never mind him…….”
“Smile” click goes the camera.

“Not one column of The Tally Ho makes any sense! The only thing that makes sense is my call for an increase in vigilance, security of the community.”
“Did you write that?”
“No Number Two, perhaps it was our own reporter.”
“The column is unaccredited, but who’s this “our own reporter chap?”
“I don’t know, I’ve never met him.” 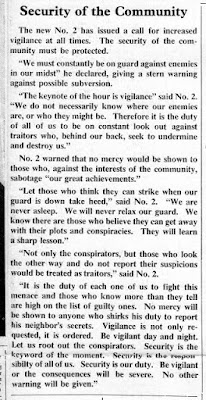 “You’re lying aren’t you?”
“No Number Two.”
“You’re in on it aren’t you…..oh yes!”
“Making up all this drivel in The Tally Ho, to what purpose?”
“I don’t know Number Two.”
“It’s as though some one has cut up pages of a book, magazine, or out of a newspaper and pasted them all on a page higgledy-piggledy and printed it all off the make a newspaper! Why should anyone do that?”
“I’ve no idea!”
“No neither have I…….oh get out get out!”