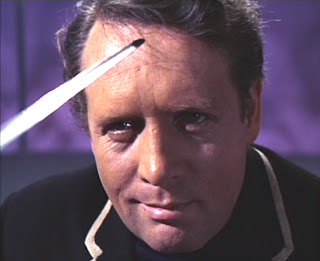 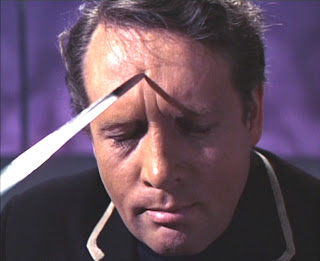 "Ah you react!" {Number 2 Hammer Into Anvil} Well I ask you, who wouldn't? It would take superhuman willpower to have a negative reaction to pain. Just a minute, isn't that what the doctor-Number22 said in her report on Number 6 'Checkmate?' It would seem that that diagnosis of Number 6 has gone by the board by the time of 'Hammer Into Anvil.'
Number 2, Patrick Cargill, sticks the point of the blade of his sword to the forehead of Number 6, in fact the point of the blade leaves an indentation. You can see in the Prisoner's eyes that there is going to be payback for this.
I have often wondered why Number 2 felt the need to have such a weapon as a swordstick, or in this case a shootingstick sword, and how he actually smuggled it into the Village undetected?
Footnote: I wonder how Pat McGoohan felt about Patrick Cargill prodding him so hard?