This week I Am Mostly Watching 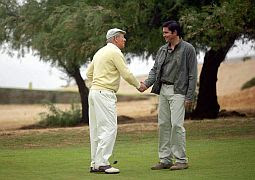 'Anvil,' in which we discover that there are 'Undercovers' in the Village, those who watch others who have become suspect. The trouble is no-one knows who these 'Undercovers' are, and it's possible that everyone is an 'Undercover,' meaning that everyone is watching everyone else!
Also we discover that there is no Number One, that there has never been a Number One, and there never will be, that according to 1,100 and Village history.
Two sets a trap for Six, and Six does all he can to work against Two. In New York Lucy wants to know why Michael resigned, but tells him he might think he's got away, but they are playing with his mind, that he's still with them.....there.
Two's son 11-12 is a homosexual, and has a relationship with 909, who is himself an 'Undercover.' 11-12 murders 909 to stop his father from finding out aboiut the relationship, but Two already knows.
M2, two's wife is awake, and enjoys her favourite meal, 'wraps.' While she is awake holes begin to appear in the Village.
1955 is a school teacher who puts me in mind of Robert Fuller in the Danger Man epiosde 'Colony Three,' a character Drake has adopted so to allow him to infiltrate Colony Three.
Dreamers are those Village citizens who are said to dream of another place, but really they are people with memories of another place, of their former life before having been brought to the Village.
People are allowed to leave the Village, but back in New York Michael has observed a change in certain people, and has reported on his observations to the Purpose Floor in Summakor. A message is sent back to Michael from the Purpose Floor in Summakor, it merely said "stop and desist!"
In this series the Therapy Zone takes on a whole new dark meaning, a place where unspecified therapy treatment is carried out. A place where you don't want to find yourself.

There are those who detest this series with a passion, I count myself fortunate to be amongst the minority who can appreciate it.