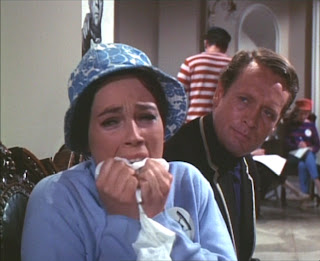 Number Six has fallen for many a damsel in distress, even to the point of becoming an avenging angel for the death of Number Seventy-three. But even the tears of a woman will not wash away Number Six's doubts, not even those of Number Forty-two.
Number Sixty-six was the first to turn on the water taps in an attempt to get the Prisoner's sympathy, so that he would to tell her why he resigned, that on the day of his arrival. It didn't work then, and it didn't work with Number Eight, the white Queen, who saw that she and Number Six could be happy together, "really!"