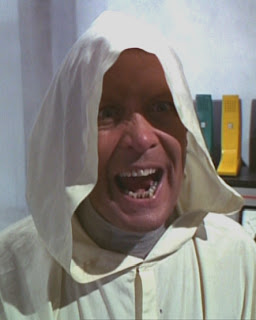 As we discovered in Fall Out No.1 turned out to be the alter ego of No.6 all the time. A Mr Hyde to No.6's Dr. Jekyll, if you prefer. There is good and evil in all of us, and we cannot live without either, remove the evil other self and we are the weaker for it. The evil side helps us make those difficult decisions we might prefer not to have to make. And the good, to keep in check that side of us which would do evil to others, well that's the principle of the idea, it doesn't always work as history has proved, it is so easy to give into our "darker side."
But what about those masks worn by No.1 which No.6 had to remove to reveal the face behind the mask, the mad, cackling face of No.1. The black and white mask could be representative of those faceless men, as of the members of the assembly seen during Fall Out, who are supposed to govern us so wisely! The ape mask, a form of representative regression, or was No.1 simply monkeying around?
So if No.1 was No.6 all the time, then No.2 must surely have been aware of this. After all No.2 spoke to No.1 on the telephone often enough. And that brings us nicely to that moment during Hammer Into Anvil when the broken No.2 begs No.6, who he sees to be a "plant" sent to spy on him and the village, not to report him. "I don't intend to. You are going to report yourself." But had No.6 taken the opportunity afforded to him to actually speak with No.1, then who's voice would he hear? Presumably his own, but then the secret of who No.1 was, would be revealed, if at that time McGoohan knew who No.1 was, which I seriously doubt. Because even by the time of Fall Out no one knew who No.1 would turn out to be, least of all Patrick McGoohan. Some of the production crew thought it would turn out to be Lew Grade, Sir Lew Grade as in later years he became. And why should any of the prodution crew think Lew Grade would turn out to be No.1? Well because he controlled ATV, and no ITC television series was made without Lew's say so. He did the deals, everyone at the time wanted to work for Lew Grade....... but as we know that is not how things turned out inside the control room of that rocket. It was infact No.6 alter ego who was No.1, his alter ego, his evil side which he was trying to beat, or at least subdue!