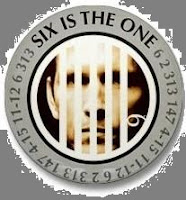 THEPRIS6NER-09 the episode 'Darling,' in which No.6 is given love in the hope that love with open up Six, and Two will be able to see the 'Six inside.' At the end 4-15 {Lucy} admits that she was brought to the Village in order to break Six's heart. 4-15 committed Village suicide by hurling herself into one of the holes appearing in the Village. But why did Lucy have to die at precisely the same time in New York in Michael's apartment in a gas explosion? Perhaps it was because she failed, or simply to stop her telling Michael the events in the Village.
The holes appearing in the Village are described as an effect of the weather, but are oblivion, beyond all hope. So to stop the peoople of the Village panicing, they are encouraged to "Keep a pig," some families are a two pig family, because according to Village propaganda pig breath helps stabilise the Village atmosphere. When in fact pigs are a most destructive animal, they rutle into the ground, dig holes looking for grubs and truffles.
Holes appear in the Village when M2 is conscious, awake, then why when she is sedated? Is that why Two was so anxious to pass the Village on to Six, that M2 was losing control of the Village in her subconscious mind?