What’s That Number 6 Up To?

It's nice to see Number Six playing "tag" with his chums? 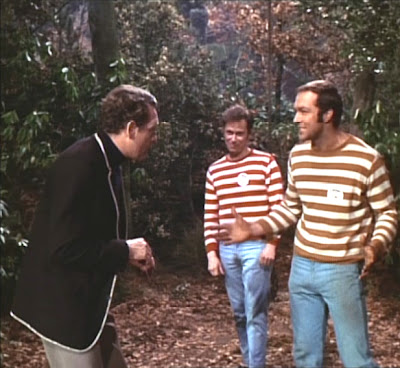 "If I 'tag' you Number Six, you'll be 'it'!"
"Can I take my blazer off first?"
"No time for that Number Six".
"Yes, but I don't want to get it dirty!"
"Bloody private school boys, you're all the same!"
"Yeah, you're all the same Number Six."
"Come on Number Six, you're 'it'."
"Don't forget I'm captain of the Boxing team!"!
"We don't care if you're the Captain of the Netball team and go about wearing a gymslip!"
"Come on Number Six play the game!"
"According to Hoyle!"
"We don't play by the rules Number Six, we're St. Guthlac boys, not bloody Ratcliffians!"

BCNU
Posted by David Stimpson at 07:53