ALL ABOARD FOR THE PORTMEIRION LAND TRAIN 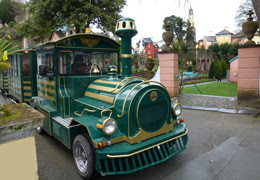 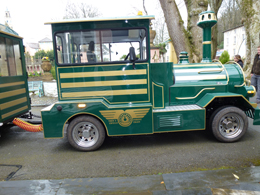 Today, Monday 2nd April sees the launch of the newest addition to the village in the form of a  Land Train here at Portmeirion. The train pulls 2 carriages and starts its journey from the Tollgate, heading through Battery square and into the centre of the village and then up into the Gwyllt. After travelling through the Gwyllt, the train then returns back into the village and then finishes back at the Tollgate. A complete journey on the train will take approximately 30 minutes. There are various stops throughout the village where you can join, so why not make your day out with us a little more memorable and enjoy a ride on the train. Theres no charge for this service 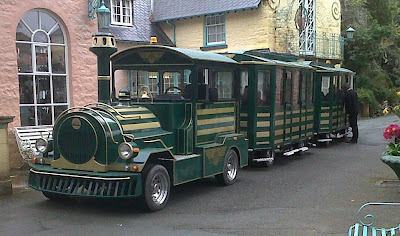 {In an emergency we walk!}
“Portmeirion is a popular tourist village in Gwynedd, . It was designed and built by Sir Clough Williams-Ellis between 1925 and 1975 in the style of an Italian village. It is one of ' most popular visitor attractions, with over 250,000 visitors every year. Portmeirion is now owned by a charitable trust, and has always been run as a hotel, which uses the majority of the buildings as hotel rooms or self-catering cottages, together with shops, a cafe, tearoom, and restaurant. Portmeirion has served as the location for numerous films and television shows, most famously serving as The Village in the 1960s television show The Prisoner.  "PortmeiriCon" is the name given to ‘Six of One's’ regular Prisoner Conventions in the hotel . The society has held these events annually since 1977.” 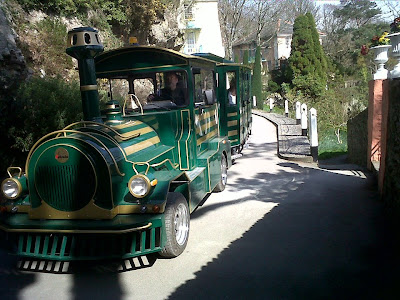