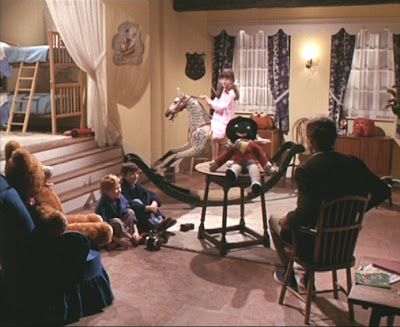 The question is, whose are these children, fictionally not factually you understand, and why should anyone trust Number Six to 'bayby sit' their children, more to the point, why should he want to? In a recent email, or was it a comment, anyway, from a friend and fellow fan of 'the Prisoner,' suggested that they could be Number Seventy-three's children {Number Seventy-three of 'Hammer Into Anvil}. Well its a different train of thought certainly, and the children proof that the Village is a growing community. But then again, no that would be silly, the children might have been brought to the Village simply as part of a ploy to get Number Six to open up to children. But that is too ridiculous, and I dispell it from my mind instantly, perferring the children to those of Number Seventy-Three, and why Number Six doesn't mind bayby sitting them, and telling them his fairy tale, in rememberance of their mother perhaps.
Thanks Steve.

I'll be seeing you
Posted by David Stimpson at 08:37