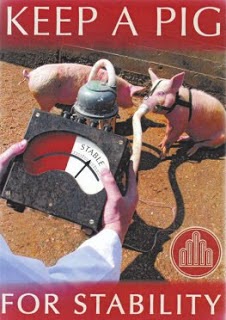 Why anyone would believe that "Pigs breath" can have an effect on the weather is anyone’s guess. I could understand it if we were talking about the other end, methane and all. Two is indeed a very clever man, giving the populous of the Village something to do in times of crisis, as more holes appear in the Village. Getting the citizens to "Keep A Pig" keeps them occupied, and thinking they are doing something in order to keep The Village stable, when in fact it does nothing of the kind. But they don't know that, do they? I mean Two could hardly tell the populous the truth, could he now? There would be riots in the streets. The Palais stormed, and M2 murdered in her bed! Or would she? It's easy to sit here and type what I think the populous pf The Village might do. But then one has to sit and consider the fact that M2, the wife of Two, controls the entire Village and the general populous therein by the power of her subconscious mind. But then I suppose Two has to keep the general population happy, just in case they ask too many questions about the holes which keep appearing in The Village from time to time. But then if M2 controls everything and everyone in The Village, it's M2 who is making them ask the questions in the first place. Or is there free thought on the part of the citizens of The Village? Can they actually "think" for themselves, when people like 11-12 are born in The Village, and don't really physically exist?

What is it Six is afraid of? Whatever it is, every time he becomes afraid, or in fear of something Rover appears on the scene, as pictured here.
In the original series "Rover" as it was called, and became known as, was the Village Guardian which kept the citizens in line, and was despatched to recapture escaping prisoners. Stopping them by suffocating its victims into unconsciousness or worse. But in THEPRIS6 Rover is not The Village Guardian. It is not activated at the command "Orange alert." It does not patrol The Village, nor does it keep the citizens of The Village in order, or chase down escaping Prisoners. You will have observed how it was armed guardians who chased the old man 93 out there in the desert, and not Rover, because in THEPRIS6 Rover's role is very much different. Here is an enlargement of the above picture, because curiously the room in which Two was interrogating Six, who is cowering in a corner, seems to have it's roof missing. What's more that room seems to be under water!
I'm only making this observation due to the way the sunlight seems to be filtered by water! There is no water anywhere near The Village. There was an ocean in the episode of Harmony, but that was like all the series, in the mind. Which is a pity really, because so is this image!

Breathe in….Breathe out…!
Posted by David Stimpson at 08:30