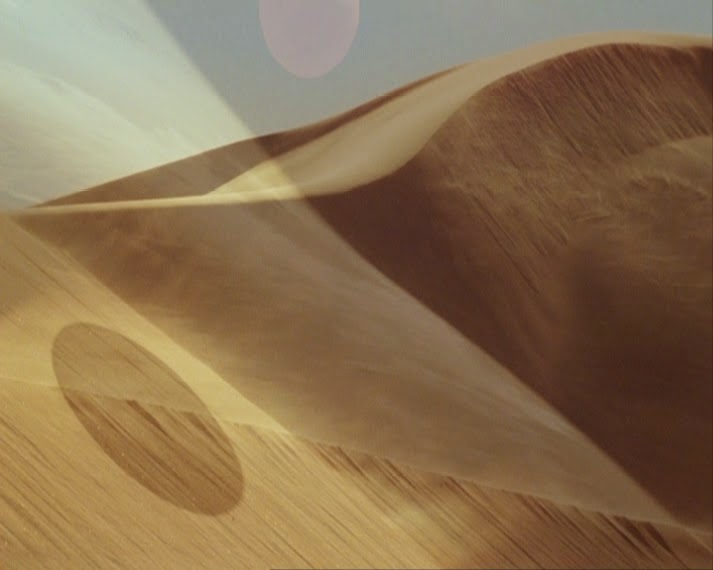 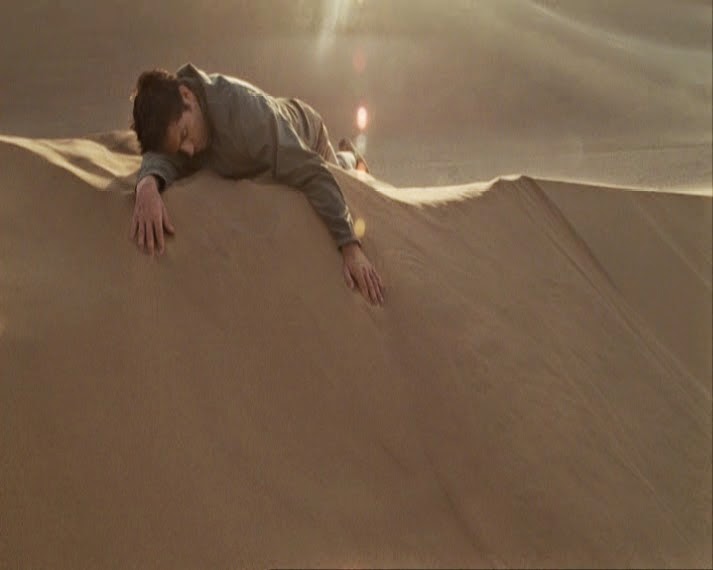 The episode tonight is Harmony, which begins where Arrival left off with the Prisoner having been attacked by the Village Guardian, which moves off leaving Six unconscious on the sand somewhere in the desert.

Six lies in the desert. The sight of a seagull flashes him back to a childhood memory of a trip he took to the beach with his brother. A man named 16 wakes him.
In the Village Clinic, Two asserts that 16 is Six’s brother. When Six denies it, 16 produces a picture of the two of them as boys. Two suggests Six go to therapy.
At 16’s house, 16’s children are overjoyed to see their uncle Six. 16’s wife prepares Six his favourite meal, and the family enjoys an episode in The Village soap Wonkers. 16 begs Six to attend therapy. “I just want my brother back,” he says.
In Palais Two, 11-12 spies on Two while he feeds the sleeping woman more pills.
In New York Michael tells Lucy, the woman from the diner, that he watched her use his phone. He knows she didn’t make a call.
Six attends a therapy session with 70 and his alter-ego, Shadow 70. He tells the two therapists in attendance that the seagulls in the desert remind him of a childhood trip to the beach with his brother. They called it the “edge of the world.”
313 intercepts Six as he’s leaving the Clinic. Six asks her if she took anything out of his pockets. She denies it.
Six is welcomed back to work at the Escape sightseeing Bus Tour, He gets to work driving on the Village tour while 16 provides commentary on the sights. Six notices one of the passengers, a woman with a winking eye, watching him.
In the Clinic, Two checks in on Six’s progress. 70 reports that as predicted, Six is resistant to therapy. Two scoffs at the idea of “therapy babble,” but maintains, “It is not necessary fr me to believe. It is necessary for Six to believe.”
When the tour bus moves out into the dessert, Six spots an anchor submerged in the sand. 16 shrugs it off as a desert folly. He takes six to an abandoned train station, reminding him they used to play there when they were children. They called it “the edge of the world.” Six admits the ruins feel familiar.
Lucy admits she lied – she didn’t really use Michael’s call phone. She was trying to pick him up in the diner. Michael thinks it curious they met on the night he resigned from his job. Lucy says it’s a coincidence.
On another sunny day in The Village, the tour bus stops at Palais Two, where Two makes a surprise appearance and boards the bus. Two announces he’s there to award a lucky family a holiday to Escape Resort: The winner is 16.
Later, Six catches 313 looking at the sketches of Big Ben and the Statue of Liberty, that she took out of his pocket. She tells Six she likes the idea of another place, and apologises for lying.
Michael tells Lucy he worked at a company called Summaker, observing security footage and collecting data on people.
That night, 11-12 asks his father about his childhood – he can’t remember it. Memory is fickle, Two tells him, but he should never doubt his family.
Six has another dream about being on the beach: A young Michael helplessly calls after his brother as he walks into the ocean.
Six takes 313 to the ruins and tells her that he feels a strange connection to the place. Following his instincts, he uncovers an old box with a note he wrote as a child. 313 holds it as proof The Village is real. Six claims it’s a trick, but now he’s not so sure.
Michael begins to tell Lucy why he resigned from Summaker. He noticed people – “too many people” – changing. When Lucy presses for him for details, she admits that she too works for Summaker. “You think you resigned,” she tells him, “They still control you.”
The winking woman from the tour buss tells Six she’s heard sounds from the ocean in the desert. 147 drives the two into the desert to search for it, but to no avail. They’re interrupted by the sight of a Village bus headed to Escape resort without Six.
16 and his family wait at The Village Bus Depot. When Six finally arrives, they decide to drive themselves to the resort. On the way, Six eyes the towers and drives towards them. He’s struck with a violent vision of the ocean while Two, sitting on the bus asks, “Do you know the way?” The vision shifts, Six is now tied to a post while Two places a grenade in his mouth.
Six snaps out of it, 16 begs him to get a grip. Confused, Six apologises for the way he’s been acting and accepts 16 as his brother. “I’m not your brother,” 16 whispers.
At Escape Resort, 16 explains that “they” made him lie. He doesn’t know what they want from Six, but it has something to do with the “other place.” 16 is afraid of what they’ll do to him. “We’ll get out first,” Six promises.
16 joins Six and the winking woman on a search for the ocean. When they finally discover it, 16 gleefully runs into the water. Six calls after him to stop, but it’s too late: Rover attacks.
Six brings 313 back top the ocean, but finds only more sand dunes. He returns to break the news of 16’s death to his family, but they are distracted by Wonkers. Six starts to shout as Clinic workers restrain him.
In the Clinic, Two admits that Six has completely lost control of himself. “Poor Six,” he says.
“I am not a number,” Six protests, “I am…Six.”

Harmony in my opinion is the weakest episode in the series of THEPRIS6NER. Two gives Six a brother, a family, because he sees the family as being important, perhaps because his own family is so fragmented. His wife continually sedated, filled with hallucinatory drugs so Helen/M2 keeps dreaming the Village. As for Two's son, well he's not the son he would have wanted for either himself or his wife. But he is Two's son, even though 11-12 doesn't actually exist outside of the Village. The idea of giving Six love, then taking is away in order to break his heart, has been tried before. The scenario of Two and the doctor 313 working together against Six in a laboratory isn't new either, they are a reinterpretation of the original, as is the whole of the series. But we do discover something about Six, that he had a brother who drowned in the ocean, carried away by the tide. This is relived for Six by the death of his contrived brother 16. As a boy Six had buried a tin containing a photograph of himself and his brother, along with a written message "Hello to you whoever you are, I am six." the thing is, as a boy Michael paces out where he is going to bury the time box. As a man Six paces the steps out he did as a boy, and still finds where the tin is buried. But surely this is wrong, for as a man Six's stride would be longer than when he was a boy! Is this Helen/M2 manipulating the situation?
Out in the desert there is a folly, a nothing, a ship's anchor which Six sees as hope, hope for escape. Because where there is an anchor there is a ship, and where there is a ship there is a sea......Six is already there, in a sea of sand! as well as the anchor there is a lifeboat, which is ignored by Six and the woman with the wink. She has heard the sea, and her story adds to Six's hope that escape by sea is possible. So imagine Six's exuberance when he, his brother 16, and the woman find the sea. 16 is splashing about in the sea in his own excitement. Six is afraid for 16 and shouts to him to come out of the sea, but 16 does not heed Six's words....and then there it is, emerging from the sea the Village Guardian. It comes upon 16, Six is frantic with fear for 16. Eventually 16 is caught by the Guardian and taken below the waves, downed and suffocated. I half expected Six and the woman to try and drag that lifeboat across the sand to the sea. But no, instead Six returns to the Village to take 313 into the desert to see the sea he had found. But by the time Six returns to where the sea was, it is gone! perhaps it was never there in the first place, which makes 16's death even more horrible. To drown in water is one thing, to drown in a sea of sand is something else. But at least 16, whoever he was is free of the Village.


Breathe in....breathe out....everyday above ground is a good day!
Posted by David Stimpson at 09:24