What’s That Patrick McGoohan Up To? 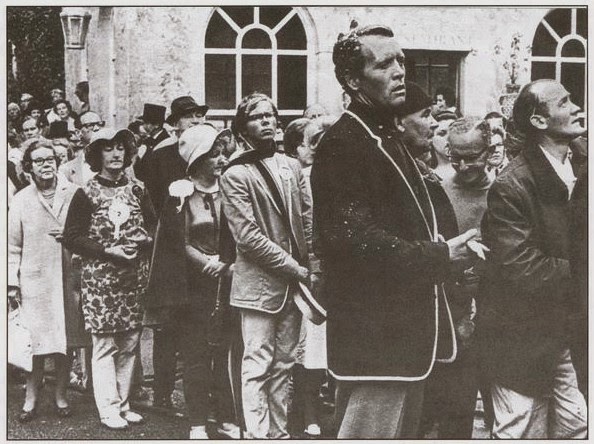 Patrick Mcgoohan "What's going on here then, I didn't say break for lunch!"
People muttering between themselves in the crowd;
"What's going on then?"
"I think they want a crowd scene."
"Well they've got that bit right!"
"Who's that bloke in the piped blazer?"
"Don't you know, that's Patrick McGoohan"
"What are we queuing up for, have they brought rationing back?"
"Someone said we were going to get paid today"
"I don't think that can be right. I think something is going on over there."
"What?"
"Don’t know, I can't see."
"Isn't it exciting?"
"What?"
"Being involved in something that one day will be a cult series"
"I shouldn't get too excited if I were you. We'll only be in the distance, long shot!"
"Yeah, either that or edited out and dropped on the cutting room floor!"
“I was in a close-up shot yesterday.”
“Really!”
“I played an old woman in a wheelchair.”
“Really!”
“I’m wearing a tinted face visor!”
“Yeah a group of us had to wear those the other day for a scene, like a welders mask they are. And we all had to stand in a rank and all had to march in a straight line.”
“Why did you have to do that?”
“I don’t know, they didn’t tell us.”
"What do we shout again?
"Six for two, six for two, then later on vote, vote, vote. Then we do a lot of cheering. Didn't you listen to what the director was saying?"
"No, I was too busy watching what they were doing with that thing on wheels. It was kicking up an awful row!"
"You mean that Go-kart thing."
"Yeah I saw that. They put it back in the van. I heard someone tell someone to get rid of the bloody thing and go and get some balloons instead!"
"What do they want balloons for?"
"I don't know, someone said go and get me some balloons."
"Did they?"
"Well I saw this chap up in the woods blowing up a lot of balloons."
"I saw one of them explode, a chap was covered in white powder."
"I was looking out over the estuary the other day. I saw a frogman with one of those balloons."
"What was he doing with it?"
"He dived into the water taking the balloon with him. A few minutes later the balloon reappeared on the surface of the water."
"Shouldn't we be taking photographs of all this?"
"I did! I took a photograph of Patrick McGoohan with one of those balloons tied to the belt of his trousers!"
"Why did they do that?"
"I saw him walking along pulling the balloon behind him, then he sort of tripped and fell over!"
"When's lunch, I'm hungry!"
"Oh look we're starting again."
"Hooray, hooray. Six for two, six for two. six, six, six, six, six for two........"