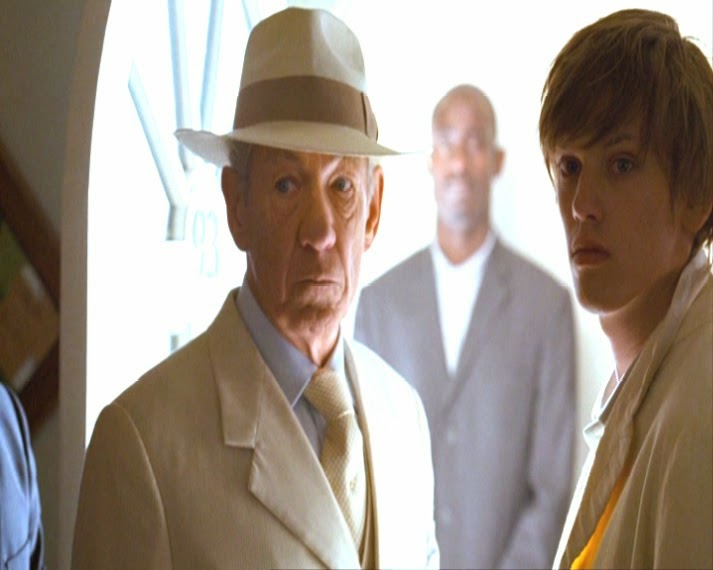 Two pity's Six, because he will not open his mind to the possibility he's wrong. If Six opens his mind, they will take it from him. Well they might, but they will always give it back!
Today, if not by date as it was on the 17th of April, is the fifth anniversary of THEPRIS6 {in Britain}and to celebrate I shall begin a screening of the series, which will be the ninth time. What's more I wouldn't be at all surprised to learn that my wife and I will be in a minority of two who will be celebrating this evening, when in  Arrival;

Michael wakes up in the desert, disorientated and unsure where he is. At the sound of a gunshot and barking dogs, he goes to the aid of an old man who is running from armed pursuers. Michael carries the old man into a cave, where, with his dying breath, the old man asks Michael to hide his body and tell someone named 554 that he got away. After burying the body, Michael follows a light in the distance and arrives in a small town.
Michael hails a cab and asks the driver to take him to the train station. “This is The Village,” the confused driver tells him, “and I do local destinations.” Michael jumps out of the moving cab and walks into a crowded night club, where a woman asks him to dance. At the sound of barking dogs, he runs back out and into the cab.
Unsure of where to go, he asks the driver to talk him to 554. “Now you’re talking,” says the driver, who identifies himself as 147. Michael finds 554, a young waitress at the local Solar Café, and tells her the old man got away. 554 identifies the old man as 93, but is hesitant to get mixed up in any trouble.
Dogs appear and chase Michael and chase Michael to a nearby rooftop, where he gets a fleeting glimpse of a before flashing back to The Village. At the approach of a man wearing a fedora. Michael faints and falls off the roof.
Michael has a bizarre dream that he’s tapped, but wakes unharmed to find a doctor names 313 – the woman from the nightclub – tending to him. 313 tells him she wants to help him accept reality. “I’m going to fetch you a cold drink ,” she says, “and then someone is going to take you home. You’re a free man.”
Michael is taken to see a mysterious man names Two. Michael demands to see the American consul and to be returned to New York, but Two – who calls Michael “Six” – tells him that’s not possible: There is no New York,” Two says, “There is only The Village.” Two wants to know what Six has done with 93’s body, but Six remains obstinate.
Six is driven to his Village apartment – labelled “6” – which is almost identical to his apartment in
.

The next day Six notices two towers in the distance. Determined to find a way out he purchases a map from the shopkeeper, steals 147’s cab and drives out to the desert.
The action cuts to
where Michael sits alone at a diner. A woman approaches and asks to borrow Michael’s cell phone, claiming to have lost hers. They flirt with each other and Michael invites her back to his apartment. The action returns to The Village.

313 approaches Six, who is passed out in the desert. Driving him back to The Village, she asks Six who was he talking to while he was unconscious “I want to help you with these delusions,” 313 says.
At home, two gathers pills from a cabinet and carries them on a tray upstairs.
147 and his wife, 21-16, are summoned to The Village Clinic for having escorted a newcomer {Six} to The Village.
Six goes to 93’s apartment looking for clues. He finds a drawing of Big Ben in
, but is interrupted by Two, who again asks where 93’s body is hidden. Six goes to 554 for an explanation of the drawing. After seeing it, 554 tells Six it was from his earlier life – “before The Village.”

147 and 21-16 report to the Clinic, where Two awards them medals for services to The Village. Two asks 147 his impression of the newcomer, and 21-16 presents Two with a cherry cake.
Throughout the Village, a public broadcast announces that 93’s body was discovered in the sand dunes.
In the Solar Cafe, Six presses 554 for details about 93. He takes her to his apartment, where she speaks of 93’s dream of his other life. “He started saying things – that we’re prisoner’s here,” she says. 554 claims there are others who dream, and shows Six her own drawing culled from a recurring dream – the Statue of Liberty.
At Palais Two, Two feeds pills to a woman who appears to be asleep in bed. His son 11-12 enters and asks Two why Six believes there is another place. “For people like Six, life is not enough,” Two says, “They want to escape it.”
Six visits an empty grave at The Village cemetery where 93 will be buried. 313 approaches to discuss Village history. 313 asks six about the woman he dreamed of.
Back in
, Michael tells the woman he resigned today. She tells him her name is Lucy.

The next day, Six crashes 93’s funeral. He tells the mourners that there is another place outside The Village and that 93 found a way out. “If 93 found the way out” says Two, “Six  can convince himself there is an out. Six must try to escape because Six knows there is nothing to escape from.”
Six heads to the Solar Café to see 554, but is stopped by 147, who tells him he’ll always be there if Six needs him. Moments later, the Café explodes. Clinging to life, 554 tells Six that 93 told her to “follow the towers,”
554 dies at the hospital. Six asks 313 if the bomb was an act of terrorism. 313 begs him to stop meddling.
Distraught, Six goes to the gates of Palais Two. “I will find a way to escape,” he screams “I am not a number. I am a free man.!” Six runs into the desert towards the towers, but it stopped by an enormous white hovering ball – Rover.

When I first watched Arrival I thought Six was having flashbacks of his former life as Michael in New York. When I watched the episode a second time I realised I was wrong. Six isn't having flashbacks of his former life, because he's living two existences at the one and same time, as does anyone who is bought to the Village. But the question is, does Michael in New York have any thoughts of the Village?

"See how the sun makes it all glow. The kind of day that makes you feel good to be alive"
{Two - Arrival}

Be seeing you
Posted by David Stimpson at 09:39