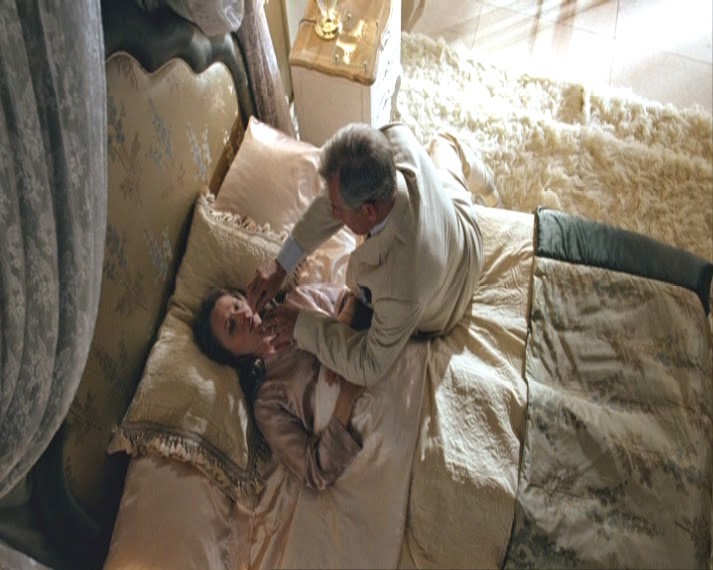 As readers of my blog will know, I have a real appreciation of THEPRIS6NER, in fact I feel quite passionate about it. But I think screenplay writer Bill Gallagher made a mistake with Two's wife M2. I don't understand why M2 has to be heavily sedated in the Village, and confined to her bed for much of the time, except when Two allows her to be awake so that they can spend a few minutes together. It is not M2 who is dreaming the Village, because she is not physically in the Village. It is M2's real life counterpart Helen in New York, who is heavily sedated and dreaming the Village.
It would not have made the slightest difference if M2 had been conscious in the Village. There could still have been holes appearing in the Village when Helen was awake in New York, instead of M2 being awake in the Village. And M2 could have spent time with the son, would have got to know him, instead of having to ask Two about her 11-12 each time she wakes up! Also Two and M2 would have been able to live their lives together in the Village, with their son 11-12 instead of suffering the fragmented family that it is.
One other thing. We are always seeing Two with his sedated wife M2 in their house in the Village, and yet it is not until Checkmate that we see Curtis with his wife Helen in their apartment in New York together. I suppose Curtis must be there with his wife, in order to maintain her sedation, and feeding her those hallucinogentic drugs which allows her to keep dreaming the Village. But in Checkmate when Two pulls the pin of that hand grenade and it explodes, releasing Two from the Village, Curtis appears in his New York apartment giving the impression that he has physically been away in the Village and had just that moment returned. In fact there is no way Curtis could have physically been in the Village, only in his subconsciousness, his physical being would have been in New York all the time. Bill Gallagher said of THEPRIS6NER, that all the loose ends would be tied up in the final episode, I think Bill also got that one wrong!