A B And C And Free For All

Last night my wife and I watched the two episodes of ‘A B And C’ and ‘Free For All’ on ‘True Entertainment’ and the longer I watched the easier I found it to ignore the fact that the picture aspect had been altered to 16:9. In fact it is only apparent in long shots, such as the long, now extra wide runway at the start of the opening sequence, and the squatness of the Lotus Seven. And I found myself forgiving ‘the Prisoner’ for that, it no longer mattered to me as it had with ‘Arrival.’ I like the fact that in long shot, the changed aspect of the film has increased the largeness of No.2’s domed office, and the people in it smaller, making the domed chamber vaster. 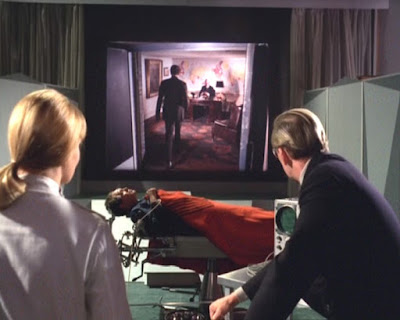 “Extraordinary, how very single-minded.”
“He’s not conventional.
“I sometimes think he’s not human!”
“It’s an anguish pattern”
My wife pointed out that the problem is that No.2 and No.14 are watching this from the wrong perspective. It’s not a dream they are watching, it’s a memory. In the three dreams of ‘A B And C’ No.6 can see himself in them. However here they should be watching the Prisoner hand in his letter of resignation through his eyes. They should see the long corridor with the doors getting closer, then bursting open and seeing the man sat behind the desk in the office.
Not seeing himself marching down the corridor towards the doors as we do, marching into the office, shouting his mouth of, stomping up and down, slamming down his letter on the desk and sealing the action with his fist before storming out!