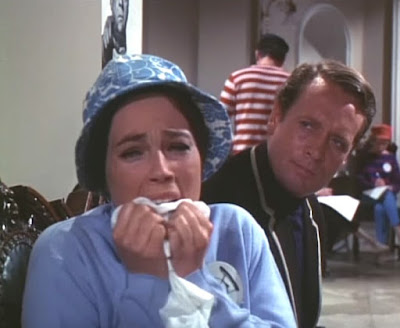 That’s just like Number 6, he’s always upsetting someone! There was that Number 8, she was in love with Number 6, but did he give her any encouragement? No! The only time he was nice to her, or anything like close to being nice, was when she came round to his cottage that night to make him his nightcap of hot chocolate. He asked her how she got in, well by the door obviously. He was later to find out that his door to his cottage is always open to them! That’s when Monique came calling. And now Number 6 has gone and upset Number 42, apparently his face and that smirk was enough to send 42 into floods of tears! It’s no wonder she turned against him, and joined the feminist movement led by that fearsome woman Number 56. She’s a man hater if ever there was one in The Village, and she likes to dish out punishment, she’s a dab hand with an umbrella! But then Number 6 doesn’t trust women, well who can blame him, after all women have been used as tools against him since his arrival in The Village. First there was his housemaid Number 66, then Number 9 who was but a pawn in the game between Number 2 and 6. Then came Nadia Rakovski, she was good, Number 6 didn’t see through her at all not until the end. And there have been others like that Alison-Number 24, all he was doing was helping her with her mind reading. Number 6 had shown her generosity and kindness in helping her, but she turned out to be no better than any of them.  So really it’s hardly surprising that Number 6 should make sure Number 42’s tears were real, otherwise she might have turned into another of those damsels in distress whom he was supposed to help!