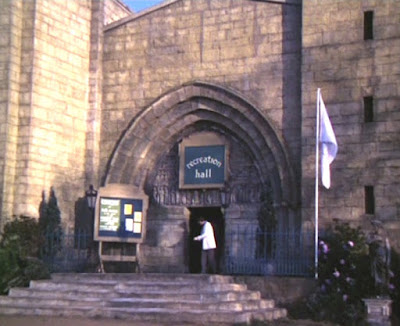 One might say it looks like a church door, after all the Recreation Hall does have a crosspiece between the two towers! And yet that archway is rather large and elaborate for such a plain small doorway. But then no less for that, it might well have once been a church, or a monastery, those figures carved into the arch have the look of saints about them. It is a pity we cannot see more of the larger figures hidden behind that large sign. One which can be seen to the right of the sign appears to have a halo. 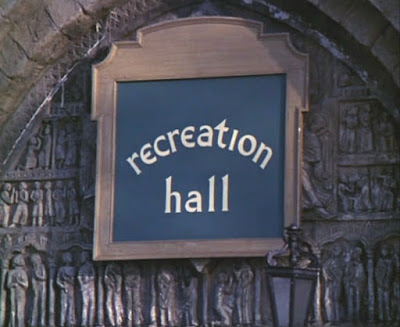 It might well be that this church saw its congregation dwindle, and it was decided to put the building to another uses, as a Recreation Hall for the whole community to use. Eventually fitted out with a gymnasium, it became a place of enjoyment and for entertainment. Where events like the Exhibition of Arts and Crafts can be held, and exhibitions of mime and entertainment. Folk music concerts, amateur dramatics, even a social club, although that might be the Cat and Mouse nightclub!
When you consider the main Italianate architecture of The Village, The Recreation Hall seems to be rather out of place. But then some might say that’s because it’s not in The Village at all, that it’s much closer to the town of Harmony! Hence the phrase, “the atmosphere here is very different from what it was elsewhere,” to borrow Number 6’s own words, or should they be Patrick McGoohan’s?!