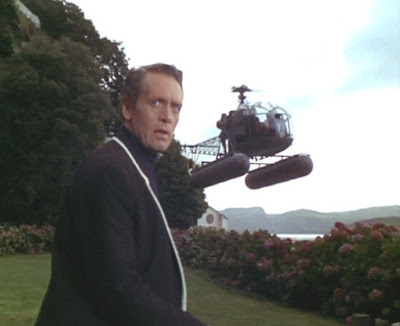 It would appear that No.6 suddenly came to his senses back in his cottage, when No.58 was repeatedly saying “Lye ezeet azoona” to him. His smirk was wiped off his face and replaced with a frown. No.58’s sudden enthusiasm “Lye ezeet azoona” “Lye ezeet azoona” “Lye ezeet azoona” “Lye ezeet azoona” seems to have a profound effect on No.6. He stumbles off his stool and backwards into the free standing lamp, and pulls off his 6 rosette from the lapel of his blazer. And makes a run for it out of his cottage, stealing the Mini-Moke parked outside and drives off. But the road becomes blocked, not only by The Tally Ho vender, but those of his supporters. Abandoning the Moke No.6 makes a run for it again, and as No.58 and his supporters pursue him, his way is finally blocked by the Butler, he ends jumping aboard a jet boat and tangling with the two motor mechanics.
How is it, that No.2 is piloting the helicopter? Perhaps he anticipated No.6’s “spur of the moment” attempt to escape! However it might be a case of coincidence, because the helicopter is actually flying towards The Village as No.6 is about to try and escape, and not simply hovering there waiting to give chase to an escaping prisoner! On the one hand it would appear that this current No.2 likes to have the “hands on” approach. Besides, piloting a helicopter and chasing an escaping Prisoner is far more exciting than driving an office desk! But that doesn’t answer the question of what is No.2 doing piloting the helicopter in the first place?