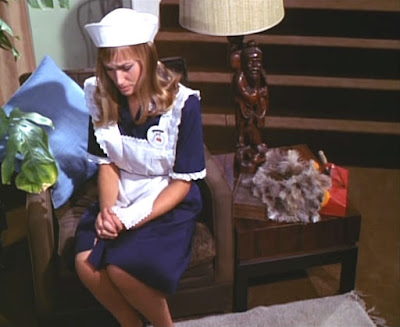 You were a willing part of Number 2’s opening gambit against the Prisoner. Really in the end you were no better than Number 9, but certainly nowhere as effective. Trying to play on the Prisoner’s sympathies, he doesn’t have any! And even if he does, he soon saw through you and your crocodile tears. It was a nice ploy though, leaving the yellow duster behind like that, it gave you the opportunity to go back to the cottage. But really was that the best you could do? They said they would let you go if the Prisoner gave you some sort of information. Well anything’s worth a try once I suppose. I would have expected Number 2 to have been better prepared. But then he cannot be blamed for the material he has to work with. And yet the new Number 2 did try the same ploy, by getting Number 9 to play on Number 6’s sympathies, but with a much better result, making Number 9 a more accomplished agent provocateur then you! But then he had better material to work with. Certainly Number 6 didn’t see through her tears, and was completely taken in by her, but then Number 9 made it appear that they had something in common, Cobb! I suspect your services were no longer required by Number 2 either!