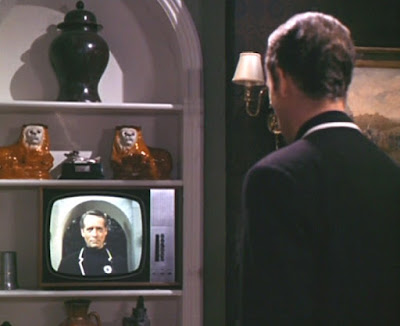 “The community can rest assured that their interests are very much my own, and that the security of the citizens will be my primary objective. Be seeing you.”

Number 6 seems very pleased with himself about his first appearance on Village television, and indeed with his latest speech, of which I’m guessing, we the television viewer hear only the closing part. But when did he make that speech? How was it filmed? The Tally Ho reporter No.113 had a strange looking cine camera when Number 6 emerges from the Labour Exchange, but Number 6’s speech wasn’t filmed then. And yet judging by the Triumphal Arch in the background Number 6 was filmed giving his speech outside the Labour Exchange.
But whenever have the interests of the community ever been his own? “The security of the citizens will be my primary objective,” that doesn’t sound like Number 6 at all, more like Number 2! This smacks of “fake news” we’ve heard so much about! And the recording of Number 6’s speech part of the episode we as the television viewer were not privy to!