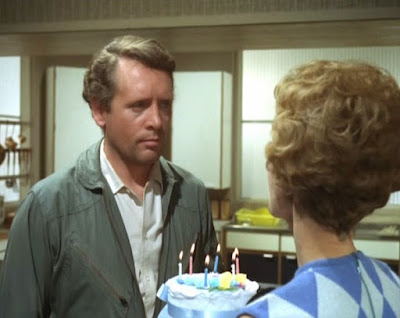 Today is the Prisoner’s birthday. Well many happy returns Number 6! It’s almost as though that having escaped The Village, he couldn’t wait to get back to The Village! Having divested himself of the parachute, Number 6 makes his way slowly back to his cottage. Remember the tree trunks and empty oil drums he left scattered on the quayside the day he cast off on his voyage of discovery? Well they’ve now been cleared away, and should have told Number 6 that The Village was never deserted!
Arriving at his home, the water shoots from the shower head, the electricity is turned back on, and the coffee percolator is bubbling away. The door to the cottage opens, and Mrs. Butterworth, who turns out to be Number 2, walks in having carried out her promise which she made back in London, to bake him a cake. But the cake has nothing whatsoever to do with his birthday, seeing as the cake has but 6 candles. It’s more to celebrate Number 6’s many happy returns to The Village. The Prisoner walks over to a window and looks out, for reassurance?
What’s happened? Well the Prisoner has learned a lesson, that no matter where he goes, there is nothing easier than for them to bring him back to The Village. In fact that “they” had been in control all the time, pulling his strings! The Prisoner had eventually come full circle, ending up where he began. In a way, ‘Many Happy Returns’ is like The Village’s local taxi service, you can go anywhere you like, just as long as you end up back in The Village in the end! And for the Prisoner ‘Many Happy Returns’ is a new arrival. The episode is circular, like ‘the Prisoner’ series itself. We know the Prisoner escapes in ‘Fall Out,’ but we also know that eventually he’s going to end up back in The Village. In the Prisoner’s end is his beginning. And when the Prisoner looks out of that window and looks out upon The Village, there are the citizens parading around the Piazza. To the eye, it looks as though the Prisoner has returned to The Village just in time for Carnival, except it’s suddenly a different season of the year. When Number returned to The Village there were no leaves on the trees. But when he looks out of the window of his cottage, there are!