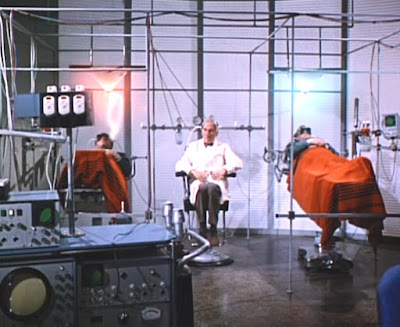 They brought Doctor Seltzman to The Village because they needed the reversal process. Well I’m personally not convinced about that part of the storyline myself but we’ll go with the script. In order to carry out this reversal process Seltzamn sits between the two subjects having wired himself up to the machine. Now if this is essential to this mind transference process, who was it who sat there between the Colonel and Number 6, operating the Seltzman machine during the first mind transference? It’s a pity we do not actually see the Seltzman machine in operation during the mind transference of Number 6 and the Colonel, and not just Number 6 wired into the machine on the wall screen!