Why Was There No Mole? 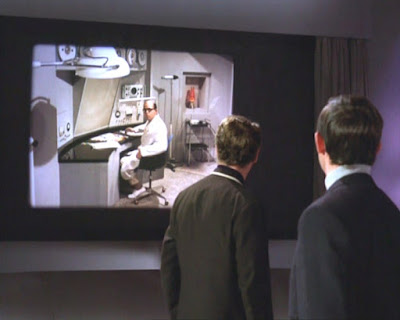 Number 24 said there was a much easier way of establishing Number 6’s identity, that Number 6 had a mole on his left wrist. Well so he had, but the other Number 6 hadn’t! Number 2 was outraged by this, and someone was going to have pay dearly for this oversight. He contacted one of the laboratory assistants Number 118, by video link. Number 118 must have wondered what Number 2 was shouting about, wanting to know why there was no mole on Number 6’s left wrist. After all his instructions were to remove the mole in the first place. But Number 118, pathetic looking man that he is, need not worry, this sudden outburst was only for Number 6’s benefit, and he wouldn’t have to see Number 2 first thing in the morning. Mind you he may have removed Number 6’s mole, while giving one to Number 12, but I bet he didn’t give him a bruised fingernail at the same time, by hitting his right index finger with a mallet!