If there’s something I like to do from time to time, its having a rummage through my Prisoner collection. It was while I was going through papers in one of my ESCAPE files the other day that I came across a crumpled, yellowish, coffee stained sheet of paper upon which at some point in the past I had scribbled my own idea for the screening order of the Prisoner. With there being both a screening order for the Prisoner and the film library order as according to film editor for the Prisoner Tony Sloman, there has always been a question amongst fans of what is the correct screening order for the series? This is the first time I have entered this debate, and publish my own listing for the first time. I realise that there are several different facts to factor in when considering what order to put the episodes in, but these facts although help define a screening order, they can also conflict with each other. For example both ‘A B and C’ and ‘The Schizoid Man’ take place at the same time according to the date of The Tally Ho newspaper. Also ‘Dance of The Dead’ is supposed to be the second episode and precedes ‘Free For All.’ How can it be that in having dispensed with an irritation like democracy, then they later hold local elections in ‘Free For All? So I decided to ignore all the facts, and place the Prisoner episodes in correct alphabetical order. It was then that I hit upon the first of two problems. First it would make ‘A B and C’ the first episode that obviously wasn’t going to work. The second problem ‘Fall Out’ would be placed 8th in the order and that wouldn’t do. So I had to make three exceptions, ‘Arrival’ had to be first, ‘Fall Out’ last, with ‘Once Upon A Time’ the prequel to the conclusion. But 14 episodes in between have been placed in correct alphabetical order ignoring ‘the’ of course. So my list is as follows.
1] Arrival, this has to be the first episode.
2] A B and C
3] A Change of Mind 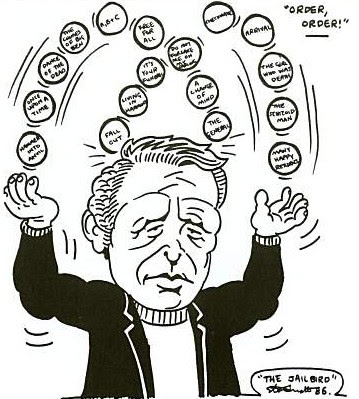 4] Checkmate
5] Chimes of Big Ben
6] Dance of The Dead
7] Do Not Forsake Me Oh My Darling
8] Free For All
9] General
10] Girl Who Was Death
11] Hammer Into Anvi
12] It’s Your Funeral
13] Living In Harmony
14]Many Happy Returns
15] Schizoid Man
16] Once Upon A Time, this episode has to
precede ‘Fall Out.’
17] Fall Out, obviously this has to be the final episode.
The Jailbird – Steve Matt 1986
18] Village Day ----- At least I do not have to give 14 individual reasons why I have placed said 14 episodes within the order I have. I am also aware that certain situations do not function well as I have broken my mantra regarding ‘Dance of The Dead’ and Free For All.’
Also by the time of the 7th episode No.6 has already been in the village for a year, and subsequently both the events of ‘Many Happy Returns’ and ‘Schizoid Man’ would take place in 1968. And what’s that edition, an 18th episode? Back in the 1980’s and 90’s fans would talk about the 18th episode to the Prisoner, so I’ve thrown the film ‘Village Day’ {produced 1998-99} into the mix. Why, because in my opinion the film is extremely fitting to be called the 18th episode of ‘the Prisoner.’ I don’t know how many reading this have seen the film, but I will say this much, there’s a new No.6 in the village who makes a terrible discovery. Although the screening order debate has been going for a very long time, no-one has ever been able to arrive at a definitive order, each as different to any other. And yet there will be those who would argue the correct screening order to ‘the Prisoner’ is the one we are all familiar with, used for television screenings as well as videos and ’s. But that’s never stopped fans from juggling with the order of the episodes.