Seeing as it’s the month of March, and Number 6 had been at sea since February 22nd, I thought it an appropriate time to watch the episode Many Happy Returns tonight, although it could have been any day in March. But it has to be in March and no other month of the year, because we are given a date by Mrs. Butterworth, March 18th. But no doubt there might be those who think Mrs. Butterworth was lying when she told Number 6 the date. But sometimes we have to take things at face value, otherwise absolutely everything in the Prisoner is questionable, and where would it all end? It wouldn’t!
All that trouble, not to mention the risk to Number 6, simply to prove to Number 6 that escape is not possible. Mind you he did make it easy for them, but where else could he have gone? Its like Number 2 said in Dance of The Dead, “He’ll eventually go back to his room, it’s the only place he can ever go,” and that appears to be true, even when Number 6 is in London, because Number 2 {although we didn’t know it at the time} was there waiting for him, well almost!
Risk? It was all a very risky business! Having survived an arduous sea voyage, Number 6 having leapt aboard a moving Luton van {which could have been travelling anywhere in England} and having fallen asleep, suddenly and explicably, at hearing a police siren jumps up and leaps out of the back of the Luton Van. Why did he do that? Yes technically he was an escaped prisoner, but the police wouldn’t have been after him. Because he’s also a nameless, homeless exile, a vagrant with no home. And after leaping out of the back of that van it could have all so easily come to an end in . Imagine our friend Number 6 run over by a bus in Park Lane after all he has gone through!
But Number 6 is a resourceful chap. He makes it across , back to his home. But it’s no longer his home, and neither it seems does his Lotus 7 belong to him. They have taken away all he possessed, and yet he takes it all on the chin. There is no ranting and raving, he is calm and calculated, and is prepared to walk away, because he has far more important things to do than worry about lost possessions.
Colonel James and Thorpe, replacements for the Colonel and Fotheringay, I wonder what would have happened had Number 6 met with them at the house in the country instead of Colonel James and Thorpe? Perhaps more importantly, how did Number 6 know he wouldn’t have met up once again with the Colonel and Fotheringay as he had during The Chimes of Big Ben when he went running back to his former colleagues a second time?
Number 6 is put through a de-briefing session during which he explains as much about the village to the Colonel and Thorpe as he can. He relates everything about his journey since leaving the village and turning up back at that office he knows so well, where he handed in his letter of resignation. That story is checked out, the lighthouse, the gypsy camp {Romanies} and Mrs. Butterworth. And it all checks out, so the dice are now heavily loaded in Number 6’s favour. Well they have to be, they have to get Number 6 back to the village!
In the end it’s just as bad for Number 6, all that effort in risking his life to return home, and look how easy it was for them to return him there. It’s as Number 2 once said, “He’ll eventually go back to his room, it’s the only place he can ever go,” and he is then greeted by Number 2 {Mrs. Butterworth} bearing a birthday cake “Many Happy Returns.”
In the original script Number 2 also gives Number 6 a small birthday present, the roll of film containing his photographic evidence of the village. But it’s the paper its wrapped in that attracts Number 6’s attention, it’s a copy of The Tally Ho bearing the headline “. No Hope of Survivors.” So really to the outside world Number 6 is dead. However that wasn’t used in the finished episode, but luckily Anthony Skeen wrote the scripts for both Many Happy Returns and Dance of The Dead, so Skene was able to work in the idea of the body of the man in the village mortuary being amended, then cast adrift in the sea to be found. With the affect that to the rest of the world Number 6 is dead! But I wonder how that would have worked if Dance of the Dead preceded Many Happy Returns? Because even without that scene with The Tally Ho with the suggested plane crash at sea and there being no hope of survivors, with the disappearance of the Gloster Meteor jet aircraft, because the pilot could not return to RAF Gibraltar without his navigator, would create the same effect.


But why would they have printed the headline “. No Hope of Survivors” in The Tally Ho? Anyone in the village having read that headline would see the next day that Number 6 wasn’t dead. So perhaps that copy of the broadsheet was for his eyes only! If Number 2 wanted the news about the disappearance of the aircraft lost as sea released to the world, I should have thought it would have been in such a newspaper as this. 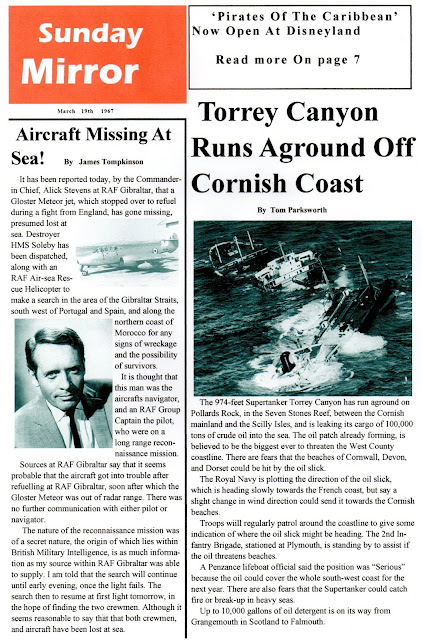 This is a mock-up of a front page of a newspaper I created a number of years ago now, just as a demonstration of how the report of the disappearance of the aircraft might have been reported.
As it happens, the picture of the Gloster Meteor jet aircraft was actually taken at RAF Gibraltar.

By a strange coincidence the picture of the Gloster Meteor, I selected for use on the front page mock-up, is the same type which appears in Many Happy Returns. It is pictured having refuelled at RAF Gibraltar sometime in 1967, coincidence, you could say that, or you might choose to say that its life imitating art. However, this Gloster Meteor jet has the additional external fuel tanks, with which the one in Many Happy Returns should have been fitted. Because without them the aircraft in the episode would never have had enough fuel for the flight between and !