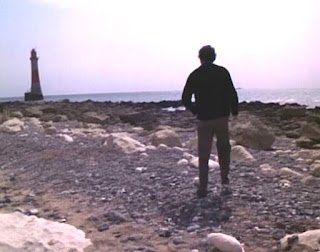 This morning the escaped Prisoner known as Number 6 was seen on the . He travelled in-land, encountered a group of gypsies at their camp. He dodged a police roadblock, and made his way to by riding in the back of a van. How the Prisoner knew that van was travelling to is unknown, after all it might have been travelling anywhere. However as it turned out it was a free ride home.
Home! The Prisoner had suddenly become a nameless exile, a tramp, vagabond, a vagrant who has no home, even his car had been taken away from him. All he had were the rags he stood in! What could he do? After being helped by the widow Mrs. Butterworth, he could do only one thing, go running back to his ex-colleagues once more. He has two calls to make, one in town, the other in the country Just as well he didn’t meet up with the Colonel and Fotheringay, but then how did he know he wouldn’t? After all he knew he had been betrayed those two during ‘The Chimes of Big Ben,’ and if he had encountered that pair again, what would he have done? 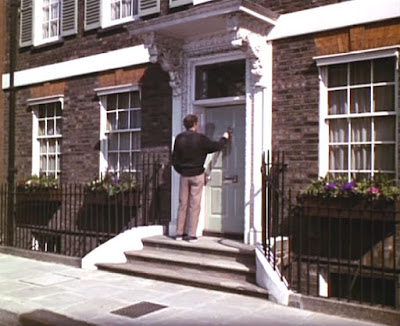 Just a minute, just a minute, when our friend Number 6 eventually arrives home, or what he thinks is his home, when he knocks on the front door, who does he imagine to be there in order to open the door?
The Prisoner gets lucky, because he encounters a new Colonel and Thorpe who doesn’t seem to take to our friend Number 6 at all. His roll of film containing photographic evidence of the village has to be developed. So if you think you have a busy day today, spare a thought for Number 6, who has to convince both the Colonel and a sceptical Thorpe of his story, a story of which every detail has to be checked, all apart from the gun runners boat of course. A Police Constable despatched to check out the gypsy camp, Special Branch sent to question Mrs. Butterworth. An RAF Group captain has to be found to pilot a jet aircraft, a Naval Commander to help calculate the search area. An aircraft requisitioned, and refuelling at RAF Gibraltar organized, all to be carried out in less than 24 hours if Number 6 is to be returned to the village tomorrow!