During the episode of 'The General,' the Professor attempts to run away from the Village, although I'm not so sure that it's an attempt to escape because the Professor couldn't run so far or too quickly. No, I think it was simply to hide in the sand that tape recorder containing his message to the citizens about the General, the General must be destroyed!
As No.6 is talking to No.12 about the probabilities and improbabilities of Speedlearn the chase for the Professor is on, a helicopter passes overhead, and from the Control Room the Supervisor announces an Orange Alert, yet such an alert generally brings about the Village Guardian, but there is no Village Guardian, as it's the students themselevs who chase down the Professor. And there is the sound of a siren as a Village taxi speeds through the Village. 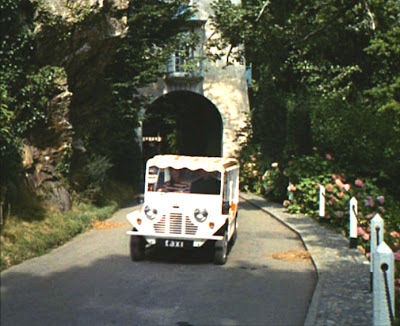 But this is unused film footage of 'Arrival,' during the Prisoner's taxi ride around the Village. I mean why bother to insert a few seconds of film into 'The General' which is obviously from another episode? 'The Prisoner' was supposed to have been so carefully edited together, with McGoohan in the editing suite to see that what he wanted done was done. And yet, sometimes the editing together of 'the Prisoner' episodes is so slap-dash! I suppose it was simply a case of utilising what they had on film.

BCNU
Posted by David Stimpson at 08:39